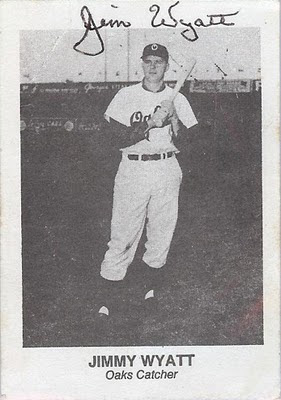 A veteran West Coast hobbyist and long-time professional baseball photographer has provided some interesting insight into the "1956 Remar Bread" card of Jimmy Wyatt that we wrote about a while back.

Doug McWilliams, a long-time Oakland Oaks collector and fan, wrote. "I saw your musings about Jimmy Wyatt and the 1956 Oaks card. I would say it is strictly a vanity card.The image used is not Mr.Wyatt. It is Dick Wakefield and it matches exactly his 1950 Remar/Sunbeam card --on the front.

"I own the original 4x5 negative used for that card," McWilliams wrote, " and have several glossy prints of same. My original has much more surrounding image on the negative than the real card does. The 'JimmyWyatt' card matches exactly the cropping of the 1950 Wakefield. I'd guess he used maybe the original printer's image (negatives, plates, etc.), but I doubt it.

"Maybe he worked in the same print shop that did the 1950 Remars, and came upon them in 1956, and printed them for fun, which might explain the coloring, toning of age, with the paper. Or, maybe he came up with some 'old' paper recently, and did them. Ihave unused paper that's 50-60 years old around here. The speculation is endless."

McWilliams continued, "If you look up minor league ball players, there is a James Wyatt listed,he would have been 20 in 1956 (not 22), he was the same weight, but not the same height. And -- he never got past 2 years in 'D' ball. I'd guess the card is for another Jimmy Wyatt.

Doug McWilliams was a major league photographer from 1969 through 1995, 24 years of that for Topps. He also shot for himself, and did B&W and color postcards for the players' personal use. His pre-1981 player postcards are listed in the Standard Catalog of Baseball Cards.