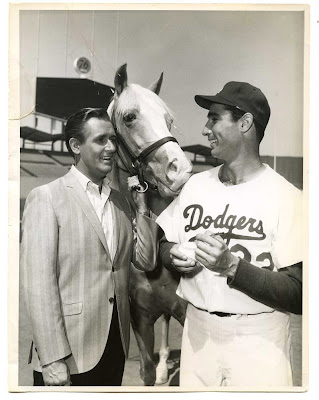 Nine months ago I presented a handful of blog entries using the umbrella title of "Pretty Pictures." That was the title of a 1930s book of cartoons by Otto Soglow that I read and reread as a child.


These photos represent the gleanings of 30+ years of throwing pictures into files during my days as a sports collector, writer, editor and publisher. I've moved these folders full of photos, cards, photocopies and notes at least six times. What makes me think that if I haven’t found time in the last couple of decades to convert these bits and pieces into features for the entertainment of collectors, that I will do so in the next couple of years?

Fortunately, rather new to the equation is this blog. It’s a lot easier to convert photos to images and “publish” articles on the internet than it was in the ink-on-paper days.

With that in mind, I’ve determined to try to wade through the files and present, as space and time allows, some of the highlights.


The photo presented here came to the forefront due, of all things, to a clue in the June 6 New York Times crossword puzzle.


A member of one of the baseball card forums that I frequent brought this to the forum's attention and it elicited some fond memories of some of the older members.


The answer was Mr. Ed, the "talking horse" of the 1961-66 TV show of that name. The referenced episode, the series' 81st, was titled "Leo Durocher Meets Mr. Ed." It originally aired on September 29, 1963. Besides hitting a home run off Koufax, the talented horse made a slide into home plate on the episode.


You can find a lot about the series by googling "Mr. Ed," but I thought I'd share just a couple of highlights . . .


Mr. Ed was the Show Business name of Bamboo Harvester, a gelding palomino who was 12 years old when the TV series began. He died in 1970.


The voice of Mr. Ed was provided by character actor Allan Lane, who was never listed in the credits.


The photo shown here, apparently a studio promotional still, pictures Mr. Ed, of course, at center. At left is Alan Young, who played the horse's owner and confidant Wilbur Post. Sandy Koufax is at right, autographing a baseball.