Jackie Jensen was one of those fair-haired California golden boys of whom the sporting press was much enamored in the late 1940s and 1950s.

He was a San Francisco native and two-sport All-American at the University of California following service in the U.S. Navy at the end of World War II.

He was a pitcher and outfielder for the Golden Bears in 1947 when they won the inaugural College World Series in 1947, beating George H.W. Bush's Yale. In the regional final he had pitched Cal to a win over Bobby Layne and the University of Texas.

As a junior in 1948, he became the first U. of C. player to rush for more than 1,000 yards in a season as Cal ran up a 10-0 regular season record. In the Jan 1., 1949, Rose Bowl (the first of three consecutive appearances for Cal), Jensen scored a 67-yard touchdown, though the Bears were upset by Northwestern.

Jensen was a consensus All-American in 1948 and was fourth in the voting for the Heisman Trophy.

In 1949 he left school and signed a reported $40,000 contract to play pro ball for the Oakland Oaks of the Pacific Coast League. Oaks owner Brick Laws had come to know Jensen through his son; Bill Laws was a fraternity brother and golfing crony of Jensen at Berkeley, and Jensen was a frequent visitor to their home.

Jensen spurned a number of big league overtures to sign with Laws. Among the most publicized was that of the Pittsburgh Pirates. Pirates general manager Roy Hamey and vice president Bing Crosby visited Jensen and offered him a reported $35,000 signing bonus and three-year contract at $15,000 a year.

In 1949 he married his high school sweetheart, Zoe Ann Olsen, who had won the silver medal for diving in the 1948 Summer Olympics in London. The star athletes' wedding was big news around the nation.

The Yankees were initially unsure whether Jensen would pitch or back up the aging Joe DiMaggio in the outfield. In part-time outfield duty he hit only .171 with no power. He did make it into the 1950 World Series, as a pinch-runner in Game 3. That appearance made him the first athlete to play in a Rose Bowl and the World Series. Chuck Essegian matched that feat in 1959 when he played with the Dodgers in the World Series. He had also played in the Rose Bowl in 1952, when his Stanford team was beaten by Illinois. Jensen, however, has the singular distinction of also appearing in an East-West Shrine Game and baseball's All-Star Game.

In 1951, he was in competition with Mickey Mantle for the center field job, and we all know how that came out.

Nevertheless, Jensen hit .298 in 1951, giving him enough trade value that he was sent to the Senators in a six-player deal. After two years in Washington, he was dealt to the Red Sox, where he laid claim to right field and became a perennial contender for the RBI crown.

Jensen told Gowdy “there isn’t a chance” of his returning to the team. “I want the fans and the Rex Sox organization to know that I hope I haven’t hurt them by retiring. It’s something I just had to do. If I’ve hurt any of the baseball people or the fans, I’m sorry. I certainly didn’t want to hurt anybody.”

In a contentious session with baseball writers on May 21, team owner Tom Yawkey, perhaps sensing it wise not to burn any bridges, said the retirement of Jensen had “obviously” hurt the team.

In retirement, Jensen worked in radio and television. In 1970 the Red Sox coaxed him back to Organized Baseball as manager at Class A Jamestown in the New York-Pennsylvania League). He coached at the University of Nevada (1970-71) and the University of California (1974-77), then moved to Virginia to raise Christmas trees and operate a baseball camp. He suffered a fatal heart attack in 1982. He was elected to the College Football Hall of Fame in 1984.

Jensen's ballcard legacy began with his appearance in the 1948 Leaf football set as a collegian. He made his baseball card debut in the 1949 Remar Bread regional set of Oakland Oaks players. His major league rookie card was in the 1951 Bowman set. He remained a stalwart with Bowman through 1954.

He first appeared on a Topps card in 1955 and was a regular through 1959. With his retirement in 1960,  Jensen was scratched from the 1960 Topps set, but did appear on a Bazooka box-bottom card.

Though he was re-retired in 1962, he appeared that year on a Post cereal card and in the Salada plastic coins series.

Someday I may do a custom card of Jackie Jensen in the 1960 Topps format, but for now my 1955-style All-American card will have to stand as my tribute the two-sport star. 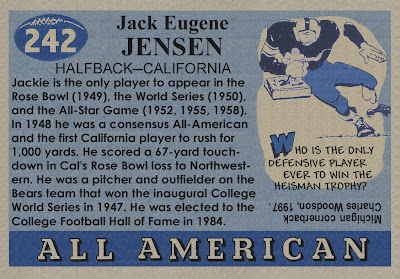