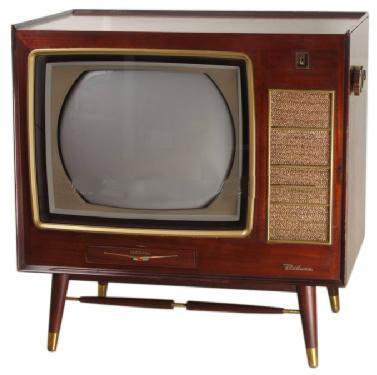 In cooperation with the commissioner’s office, on April 13, 1957, the NBC-TV network presented a 90-minute “Salute to Baseball” primetime extravaganza—live and in color.
Hosted by famed film dancer Gene Kelly (who had co-starred with Frank Sinatra in the baseball musical movie Take Me Out to the Ball Game in 1949), the program was intended as a salute to baseball, its players—current and stars of earlier days—fans, and the upcoming season in a variety show format.
While Kelly received a reported $25,000 for emceeing the show, the 18 current major league stars who appeared on the program received no cash remuneration.
Each player did, however, receive a 21-inch RCA Victor color TV . . . and each player donated his television to a hospital or other institution, with particular on facilities caring for children.
In a short item in the April 24 issue of  The Sporting News, columnist Dan Daniel listed the players and the recipients of the color TVs.