A couple of months ago (Sept. 12 posting), by way of introducing my 1958 Topps-style custom card of John Kennedy, the first black player on the Philadelphia Phillies, I presented some information on Kennedy and his career.
There were some gaps, however, that I wanted to fill in.
For instance, information I could find on the net only said that Kennedy earned a spot on the Phils’ roster on the basis of a strong showing in spring training.
The easily available biographical information also intimated that the team soured on him after finding out he had lied about his age—by more than a couple of years.
I wasn’t able to lay hands on a 1957 Phillies’ team roster, which would have shown his “baseball age,” so when it came time to work up the back of my ’58-style custom, I relied on an account that said he’d told the team he was 21.
Now, as the result of what I found on my recent trip to my home, where I have my microfilm back issues of The Sporting News, I was able to plug those gaps in my knowledge.
I’ll definitely be changing the date of birth on the back of my card to reflect the fib he told about his age, and I may even rework the career highlights paragraph and/or the cartoons.
My first search of the TSNs from 1957 was for the Phillies’ winter roster. Back then TSN printed each team’s roster in the pre-season, complete with birth dates. Unfortunately, Kennedy was not on that roster.
Thus I began an issue-by-issue search for the information I needed.
The first mention of John Kennedy I found in the 1957 Sporting News was a box on Page 33 of the March 6 issue.
Headlined “John Kennedy Breaks Color Line at Phils’ Spring Camp,” the short article, datelined , read:
"John Kennedy, Kansas City Monarchs’ shortstop last year, is the first Negro ever to undergo spring training with the Phillies.
Kennedy, 5-10, 175 pounder from , , is signed to a (Eastern) contract, but he did so well in the Phillies’ second annual rookie school he was one of five players held over to train with the regulars. The Phillies are desperately seeking a shortstop with Granny Hamner’s ailing left shoulder forcing him to attempt the conversion to pitching."
While there had been several articles in the sporting weekly earlier about the Phillies rookie school for some 50 of the team’s best prospects, I had never seen Kennedy’s name mentioned previously.
In the March 13 issue, Kennedy was profiled – complete with a portrait photo – by Allan Lewis in an article headlined “Kennedy, in O.B. Bow, Could Rate Berth With Phils”.
Lewis gave Kennedy’s age as 23, which we now know was a seven-year understatement. The writer called Kennedy “the No. 1 scholar at the kids’ college” (the Phillies special early spring training camp for young prospects).
He reported that Kennedy “performed exceptionally well for the Phillies’ rookie team in its recent 4-1 victory over the Cardinals youngsters here. He was credited with two singles and also drew a walk. He handled his position well in the field and attracted notice not only from Philly officials but also from the Cardinal brain trust.”
Phillies manager Mayo Smith was quoted, “He’s surprised us. When we signed him last August we weren’t too high on him, but he gets the job done. He gets the ball away fast and puts the bat on the ball pretty good.” 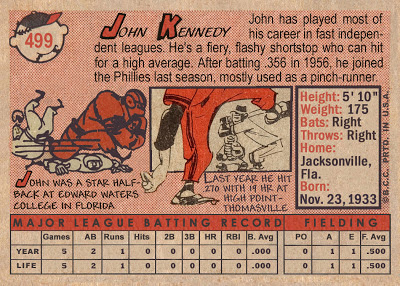 The writer reported that Kennedy was born November 23, 1933 (I found it unusual that Kennedy lied not only about the year of his birth, but also about the month and day) and that he “fibbed about his age so that he might put in a hitch in the Army before going into baseball. He served with the engineers at Fort Leonard Wood, , in 1949 and ’50. He returned to high school in ’50 but left shortly afterward.”
The article cited Kennedy’s 1956 record with the Monarchs as featuring a .385 batting average with 17 home runs in 100 games, which induced Phillies’ scout Bill Yancey to sign him to a Class A contract with Schenectady.
Lewis’ assessment of Kennedy’s baseball skills read, “He’s of average speed and has been more of a line drive hitter than a home run slugger this spring. He has good reflexes, an adequate arm and fair range.”
Given that review, and manager Smith’s faint praise, it’s surprising that Kennedy made the big club, however, briefly. Evidently the Phils really were that desperate for a shortstop before the trade with the Dodgers that brought Chico Fernandez to . I can’t help but think social pressure on the team to add a black player was also a factor. Along with the Tigers and Red Sox they were the only major league team without black players on their rosters.
Kennedy’s name popped up again the March 27 issue, where Lewis wrote:
“Kennedy was the big news of the rookie school and was held over to train with the parent club. With the regulars, Kennedy began to come apart a little in practice. His fielding was not as sure and his stickwork fell off.
“Then he was given a chance in the second week of exhibitions and his play was top-grade. Used at both shortstop and third base, Kennedy was flawless in the field and drilled line drives to left field. He was batting .500 after the first nine exhibitions and had not made an error in the field.”
By the time the team had 16 exhibition games in the books, Kennedy was leading the Phillies regulars with a .409 batting average and Lewis upgraded his assessment of Kennedy’s fielding to “(he) has been a steady, and sometimes flashy, performer at shortstop.”
With Opening Day two weeks away, Kennedy had the rug (turf, actually) pulled out from under him.
Doing his customary post-game running in the outfield, he fell and badly bruised his right shoulder.
The Phillies reacted by finally making a trade for a shortstop. They sent veteran outfielder Elmer Valo, pitchers Ben Flowers and Ron Negray, two career minor league infielders and a reported $75,000 to the Brooklyn Dodgers for Chico Fernandez, who had gotten into 25 games in 1956, backing up Pee Wee Reese and seeming destined to play behind Don Zimmer for the foreseeable future.
Phillies general manager Roy Hamey said, “I feel we got youth, speed and defense, and our scouts tell us he’s a cinch to make the grade.”
While seemingly sold on Fernandez as a “sure, graceful fielder who has a strong arm and can make the double play,” according to Lewis, the Phillies hoped to get an added bonus of speed on the basepaths with Fernandez batting second behind consummate leadoff hitter Richie Ashburn.
Kennedy’s bruised shoulder may have been the impetus for acquiring Fernandez, but Lewis wrote that the team was not convinced Kennedy would have been the answer to their long-standing problem at short. “The stocky Jacksonville native did everything that was asked of him at the shortstop post before he was injured,” Lewis wrote, “although Phils’ officials were not sure that his arm was strong enough for the job or that he would continue to hit as well as he did during the exhibition season.”
Kennedy ended spring training with a .343 batting average. Because of his injury, he played sparingly after March 22; of the 14 box scores I found between March 23 and the end of the Grapefruit League season, Kennedy appeared in only five games, batting just .182. The Sporting News did not carry box scores of the four-game series between the Phillies and Red Sox working their way north between April 10-14. 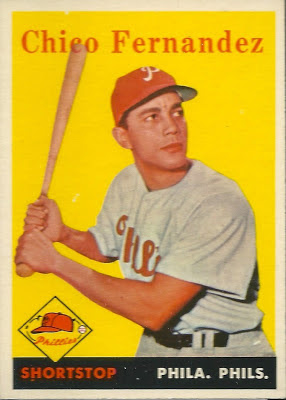 Nonetheless, the same day the Fernandez deal was announced, Kennedy was told that he had made the major league roster.
Making a claim I have never previously heard, Lewis also described Fernandez as a “Negro” in a sidebar to his April 17 column.
Headlined, “Phillies, Last in N.L. to Add Negroes, Now Have Couple,” the item read, “The Phillies became the last National League club to include a Negro on its roster when Shortstop Chico Fernandez was acquired in a trade with the Dodgers and Infielder John Kennedy was promoted from to the parent club.”
Fernandez was Cuban-born but not particularly dark-skinned for a Latino. Whether he would have been able to “pass” the unspoken color bar that Jackie Robinson had breached 10 years earlier is certainly open to question. If, indeed, Fernandez was a “Negro,” it would make him, not Kennedy, the first of his race to play for the Phillies; Fernandez made his debut in Phillies’ livery in the season opener on April 16; Kennedy on the 22nd.

On May 6, after five games with the Phillies (three as a pinch-runner), Kennedy was optioned to High Point-Thomasville (N.C.) in the Class B Carolina League, never to return to the majors.
Posted by Bob Lemke at 2:38 PM