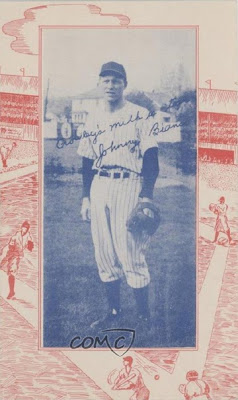 While paging through the Goodwin & Co. catalog for their Sept. 19 auction, I lingered at Lot 18, a complete set of the 1940 Crowley's Milk Binghamton Triplets with each card graded by SGC.

I've always had a fondness for this set because it includes one of the few baseball cards of Jimmy Adlam (more about this card later), who managed my home town Fond du Lac Panthers in the Class D Wisconsin State League in the mid-1940s and early-1950s.

The Crowley's set  was issued at time when there were few minor league team sets being produced on the eve of U.S. participation in World War II.

The Binghamton Triplets were the Class A affiliate of the N.Y. Yankees. In the year of this set's issue, they won the Eastern League championship.

The 1940 card set was sponsored by a local dairy. The 3" x 5" blank-back cards featured blue duotone full-length poses of 16 players, plus a card of the trainer and a card of the manager with the bat boy, "Filbert". (The Trips' manager in 1940 was former major leaguer Bruno Betzel, whose given name was Christian Frederick Albert John Henry David Betzel -- no wonder they called him Bruno.)

Ten players from the 1940 Binghamton roster would eventually have at least a cup of coffee in the major leagues.

What piqued my attention in the Goodwin auction listing was a chart detailing the SGC grade of each of the set's cards. Goodwin described it as "the ONLY Professionally Graded Complete Set in Existence!"

According to the chart, the graded cards range from VG to EX/MT+, with the average grade of 57.8 (VG-EX) on the SGC 100-point scale.

I was particularly interested, however, to note that according to the auctioneer the combined number of 1940 Crowley's cards slabbed by PSA and SGC stood (at the time the catalog was compiled) at 47 . . . of which 13 were Johnny Bianco cards!

Why in the world are more than 25% of the graded Crowley's cards those of Johnny Bianco?
None of the other cards in the set are known to have more than four graded examples.

Bianco never played in the major leagues. In 1940 he was a 20-year-old pitcher for Binghamton, playing in his second professional season. He won four and lost two that year on a 2.11 ERA.

He was out of pro ball for the 1942-45 seasons, presumably in military service. He returned from the war and pitched with the Yankees' AA and AAA teams and in the Pacific Coast League through 1948. He retired with a 43-29 minor league record.

Most likely the 1940 Crowley's cards were stadium giveaways, probably distributed one per game on baseball-card promotional days/nights. Were the Bianco cards really given away at a rate more than three times the others, or is some other factor responsible for the over appearance of that card at the grading companies' doorsteps? We may never know.

As mentioned earlier, Jimmy Adlam was included in the 1940 Crowley's set. That's mystery #2. 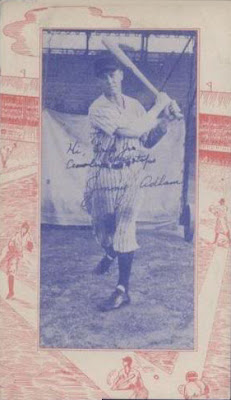 Why was Adlam in this set. In 1940 he played the entire season -- according to baseball-reference.com -- in the Eastern League -- but he played for Springfield. I have to crawfish here a bit. The internet reference specifies that Adlam played 98 games for Springfield. It's possible that he may have played a few games for Binghamton, and that the source material for the baseball-reference.com listing -- usually the Spalding Official Baseball Guide -- didn't publish that fact.

One more tidbit about the 1940 Crowley's Milk set: in his facsimile autograph, Vince DiBiasi misspelled his name as DeBiassi.

The graded set in the Goodwin auction sold for $4,985.

"I did some quick checking and have found Adlam playing 2B for Binghamton throughout 1940 in various online newspapers.


Also, regarding the Spalding Baseball Guide you mention in the article:

In 1940 and 1941, the American Sports Publishing Company, which had put out both the Spalding and Reach guides since 1935, consolidated both into a single edition, called the Spalding-Reach Official Base Ball Guide."
Posted by Bob Lemke at 2:24 PM