Uncommon commons: In more than 30 years in sportscards publishing I have thrown hundreds of notes into files about the players – usually non-star players – who made up the majority of the baseball and football cards I collected as a kid. Today, I keep adding to those files as I peruse microfilms of The Sporting News from the 1880s through the 1960s. I found these tidbits brought some life to the player pictures on those cards. I figure that if I enjoyed them, you might too.

I don’t know where baseball historians currently stand on who was the first to catch a baseball thrown from the top of the Washington Monument. Yesterday in this space I presented details of Senators catcher Gabby Street’s successful attainment of that feat.

His grab is certainly the most famous, but over the years I’ve read of other, earlier successes with the same stunt.

That article mentioned a Washington Post article of Aug. 26, 1894, that said Chicago catcher William Schriver performed the feat. Like Street’s catch, the Post reported that it was a sporting proposition between Colts manager Pop Anson and H.P. Burney, chief clerk of Washington’s Arlington hotel.

According to the newspaper, the witnesses to Schriver’s catch included, besides the wagering parties, Clark Griffith, president of the Washington Nationals, the hotel’s manager, Frank Bennett, and Schriver’s teammates Parrott, Decker, Stratton and Hutchinson.

The Sporting News in 1940 speculated that the reporter who “covered” the story was not actually in attendance.

The paper quoted Griffith as substantiating that suspicion, saying, “I dropped three balls. Only one of the three was reached by Schriver and he dropped it. The first man ever to catch a ball from the Washington monument was Gabby Street.”

TSN speculated that those actually present at Schriver’s attempt “kept their tongues in their cheeks in order to give Chicago some welcome advertising.”

The account of Street’s catch in the Aug. 21, 1908, Washington Evening Star, mentioned that earlier attempts – all unsuccessful – had been made by Paul Hines, Charley Snyder and Buck Ewing. Schriver was not mentioned in that piece.

In the 1940 TSN, the article concluded, “The evidence of other besides Griffith, who were present at the time Schriver is said to have made the catch, would help to solve the puzzle. If there are any of them who read The Sporting News, or anyone who knows them, The Sporting News would like to get their versions.”

I’m also unsure of what the accepted record for a baseball caught from a great height might be. I did read of an attempt from 800 feet that went awry.

At the New York World’s Fair on July 3, 1939, San Francisco Seals catcher Joe Sprinz attempted to catch a ball dropped from a blimp 800 feet in the air. 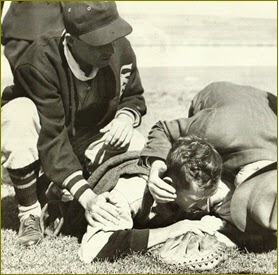 Prinz caught the ball, but the force of the impact drove his catcher’s mitt into his face breaking his jaw, cutting his lips and knocking out five teeth.
Earlier that year at the Golden Gate International Exposition, Sprinz had caught a ball dropped from the Tower of the Sun building. He had only been able to snag one of six balls dropped from the height of 437 feet. It was estimated the balls dropped at a speed of 100 miles per hour.
Posted by Bob Lemke at 9:39 AM