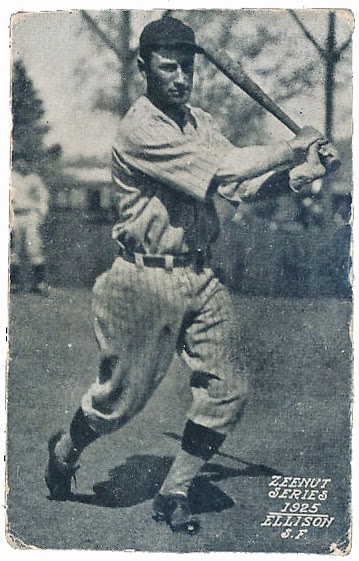 More than a decade after his prized watch was stolen halfway around the world, former Detroit Tigers utility man Bert Ellison recovered it.

Bert Ellison Prized Watch
Returns After Long Trip
VANCOUVER, Wash.—A watch given Bert Ellison when he managed the San Francisco Seals to the pennant in 1925, that was stolen in Kobe, Japan, in 1933 and pawned in China in 1935, was found in a city park here a few days ago and returned to Ellison, who now lives in San Francisco. Although discovered lying on the ground during a heavy rain, the watch still runs and keeps perfect time.


Ellison last heard of the watch when it was purchased in a pawnshop in China. He tried to contact the man who bought the timepiece, but failed. How it turned up in Vancouver is a mystery. Some boys picked up the watch in the park and, noting the presentation inscription with Ellison’s name, turned it over to Capt. Dewey Crowley of the police force. He contacted President Charles Graham of the San Francisco club to ascertain Ellison’s whereabouts.

Ellison, who was more often known as Babe Ellison during his playing days, was usually the youngest of Ty Cobb's teammates when he played with Detroit 1916-20. After playing at ther University of Arkansas and a season in the Class D minors, He came up to the majors for a few games each year from 1916-18, spending most of the first two years in the minors and most of 1918 in the Army during World War I.

He peaked at 61 games in his final big-league season of 1920. Ellison was a light-hitting utility infielder and outfielder with the Tigers. His major league career batting average was .216 and he had only one home run in his five seasons.

After a season managing Dallas in the Texas League in 1928, Ellison retired from baseball, later working as a U.S. Customs agent in San Francisco. He died in 1955.

Because his seasons with the Tigers were lean years for baseball cards, and he was only a part-time player, Ellison has no big league card appearances.