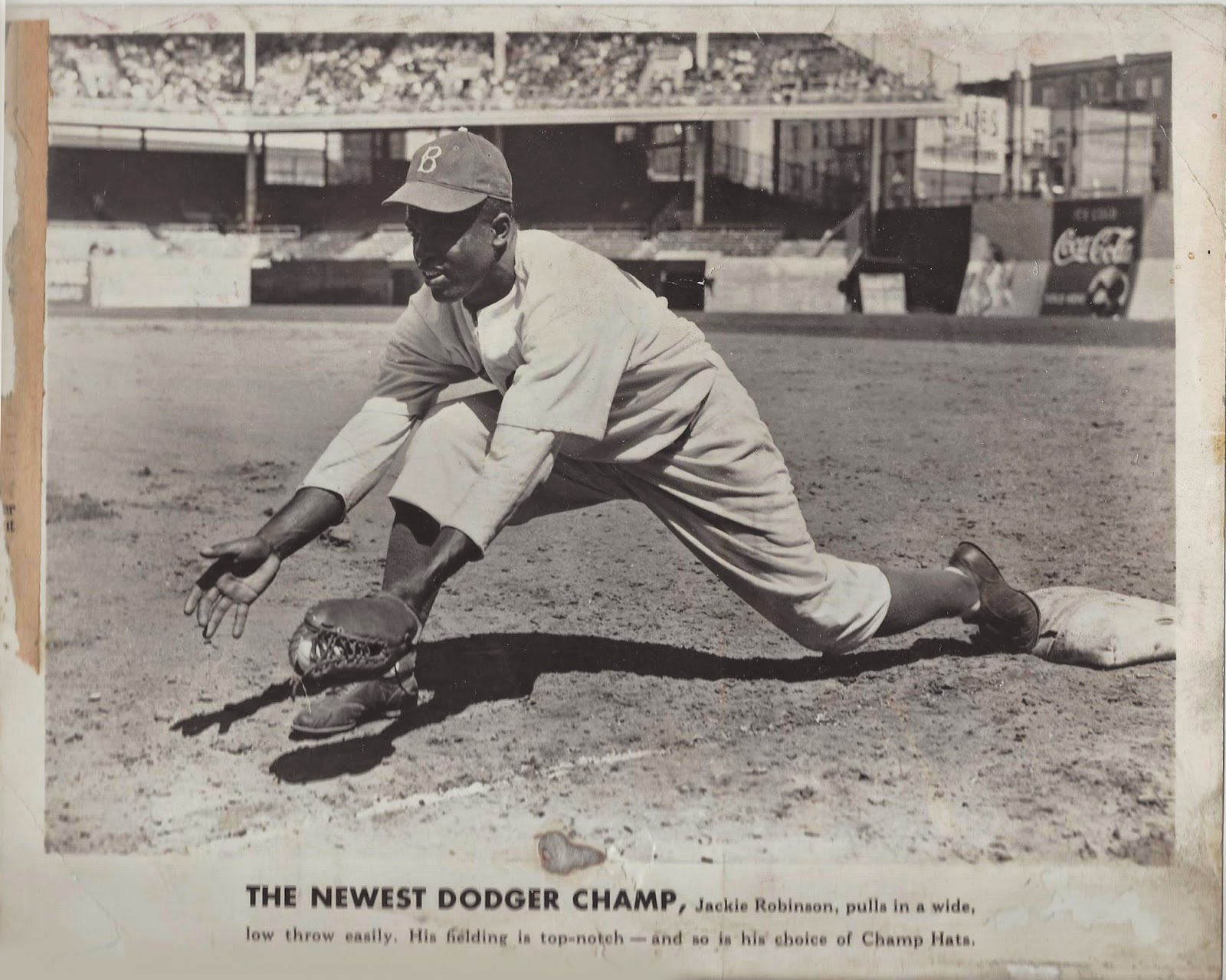 The discovery of a significant, probably rookie-year, Jackie Robinson premium picture in an existing issue has been reported by long-time catalog contributor and vintage collector Larry Serota of Florida.

The piece is a premium picture issued by Champ Hats, likely in 1947, based on the caption that reads: "THE NEWEST DODGER CHAMP, Jackie Robinson, pulls in a wide, low throw His fielding is top-notch -- and so is his choice of Champ Hats".

For a number of years, the Standard Catalog of Baseball Cards has carried a two-player checklist for Champ Hats premium pictures: Mickey Vernon and Dixie Walker. The year was speculatively stated as 1947, based on that short list.

Reference to Robinson as the "newest" Dodger seems to strengthen that supposition.

The newly reported Robinson is, like the others, in black-and-white, 8" x 10," blank-back format. Unlike the Vernon and Walkers pictures, the Robinson is horizontally formatted. It also differs in the style of the caption. 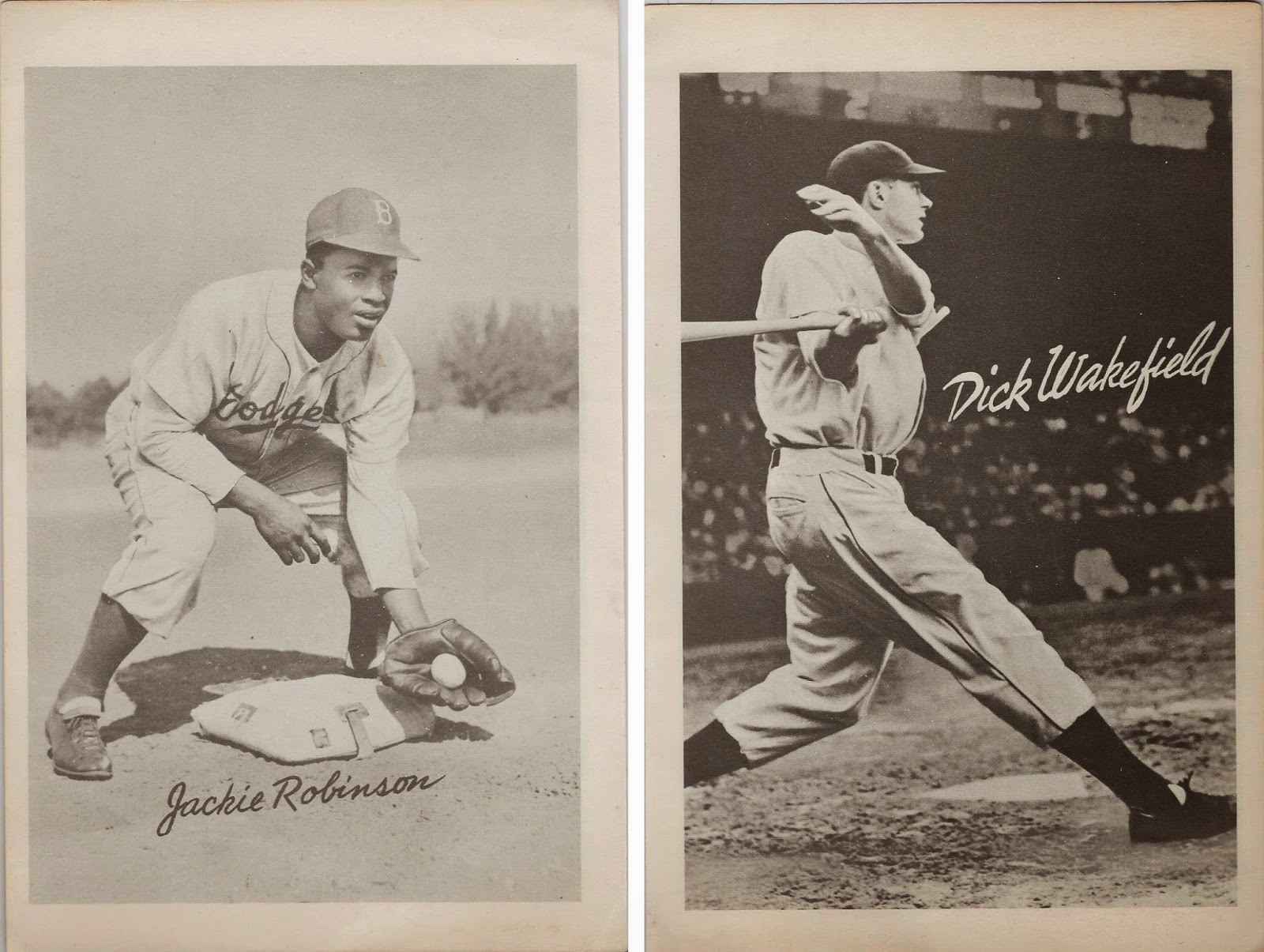 And a Jackie Robinson "whatzit?"

Accompanying Larry's report of the Champ Hat Robinson was an inquiry about a second, currently unattributed, Robinson picture.

The 5" x 8" black-and-white picture has Robinson printed back-to-back with a picture of Dick Wakefield. My best guess is that the Wakefield photo shows him as a Detroit Tiger, for whom he played 1941, 1943-44, 1946-49. He also played three games each for the Yankees (1950) and Giants (1952). There are facsimile signatures of each player.

According to Serota, the Robinson-Wakefield piece is printed on thin stock described as similar to contemporary picture-pack issues.

The files of such mystery pieces that I maintained while editor of the "big book" were discarded years ago. But somewhere in my memory is a recollection that a similar item found in hobby commerce was believed to have been a page taken out of a late-1940s or early 1950s baseball book.

If that proves to be the case, some reader will likely be able to cite the book's name and publication date. Of course if it does turn out to have been excised from a book, the piece's collectible value will be minimal.

If you have any details to share, you can email me at scbcguy(at symbol)yahoo(dot)com.


"Great article. The Champ picture was taken on opening day (prior to the start of the game)... it's the same as the picture in this thread, though from a different angle. It's also the same image used on one of the 13 Bond Bread cards.

"This is speculation, as I wasn't alive in '47, but I'd be willing to bet that the Champ Hats premium came out after the season was finished in October.

"Here's why: Branch Rickey had forbid Jackie from signing any endorsement deals during the season. It wasn't until October of 1947 that Rickey conceded, and allowed Jackie to sign his endorsement deals with Bond Bread, Old Gold, Borden's Milk, and perhaps Champ Hats? (See this article, where it mentions he endorsed hats: http://www.markroesler.com/pdf/articles/business.pdf )

"While he was part of the larger Bond Bread card set, the fact that there is such a small checklist leads me to believe some sort of agreement was signed for using his likeness. Calling him the newest Dodger champ would make sense too, considering the Dodgers won the NL pennant.

"Dixie Walker and Jackie were both highly sought after in terms of endorsements. As I stated in another thread, Walker was the face of Wonder Bread... Jackie, of Bond Bread.

"With that being said... Walker was traded to the Pirates in December, 1947. With Robinson's premium being different (horizontal) than the other two, I wouldn't be surprised if his was released at a different date (perhaps later). I'm guessing the premium came out in late October / early November, 1947.

"On another note, the other premium shows Robinson wearing a fielder's glove as opposed to a first-base mitt. That leads me to believe that the second photo is likely from 1948 or 1949 (given the Tigers uniform of Wakefield)."