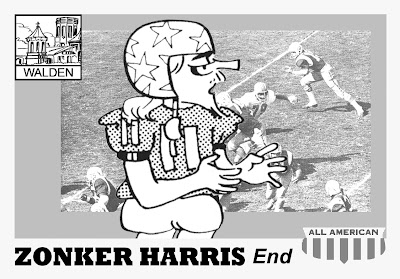 By the time I was 20 or 25 cards into my custom set of 1955 Topps-style college football cards, I was looking to shake things up a bit.


Until he got so stridently liberal (or maybe since I got more conservative) I was a fan of Garry Trudeau's Doonesbury comic strip. He was making a name for himself as a cartoonist in the pages of the Yale Daily News at the same time I was growing my hair, giving aid and comfort to the enemy, killing brain cells and generally wasting my college years.


I think I was reading one of the coffee table books of his early strips when it hit me that one of his best-loved characters, Zonker, had played college football for Wa 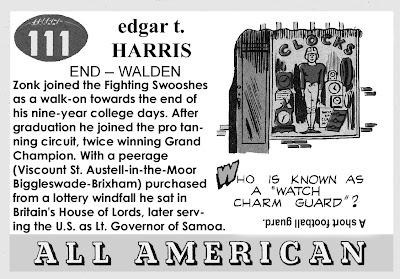 lden. One thing led to another and the card presented here was the result. Yes, my original is in black-and-white.
I spent nearly an entire afternoon in the library paging through various Doonesbury compendiums (compendia?) to find not only the images for my card, but the "biographical" details for the write-up on back.
If you're familiar with the original 1955 Topps All-American card set, you know that the college logo used on Notre Dame players' cards is a "skyline" drawing of one of the campus's landmark buildings. From the moment I decided to do a Zonker Harris card, I knew I wanted to parody that logo. Finding a picture of Zonker in uniform wasn't nearly as difficult as finding the proper image of Walden College's skyline.
While it is decidedly different in both intent and execution from the other 125+ cards in my '55-style set, the Zonker Harris card remains among my personal top-10 favorites.
Posted by Bob Lemke at 2:13 PM