My favorite player on a favorite format 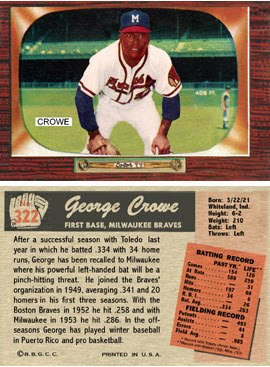 
As is often the case, pinning down why he was my favorite is largely conjectural. It may have stemmed from seeing Crowe up close and personal at my first big league game, when we got to use my uncle's box tickets at County Stadium that were just a few rows behind the Braves' dugout on the first base side.


It may be that Crowe wore glasses, one of the few major leaguers to do so at a time when I was struggling to come to terms with being the first "four eyes" in my kindergarten class.


In any event, as an adult collector I have always been a sucker for Crowe's cards. And, since I've begun making my own custom cards, I'm now able to fill in some of the gaps in Crowe's baseball card legacy. 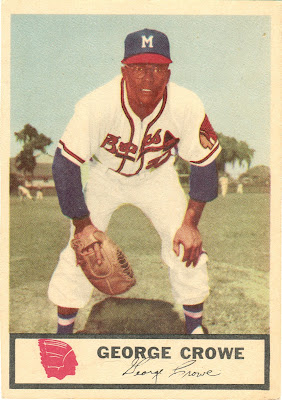 
Crowe's only 1955 baseball card was in the Johnson Cookies regional issue shown here. Truth be told, the '55 Johnston card of Crowe is one of my all-time favorite baseball cards, so it's no wonder I stole that image to use when I made this 1955 Bowman "Color TV" card.
The background for the front of my 1955 Bowman-style card was taken from Jim Wilson's card in that set. I'm not sure why, but I always felt that Wilson's photo in the 1955 Bowman set was a photo that had been taken at night; it may be the dark stands in the background or the strange green color of the grass. I think Jim Brosnan's card in the same set has a similar feel.
In any event, my first effort at recreating a 1955 Bowman-style card was very satisfying for me. I don't really have any plans to do another at this point, but there were a lot of big stars in '55 that didn't get onto a Bowman card, so someday I may try another. Stan Musial? Roberto Clemente rookie?
Posted by Bob Lemke at 1:48 PM