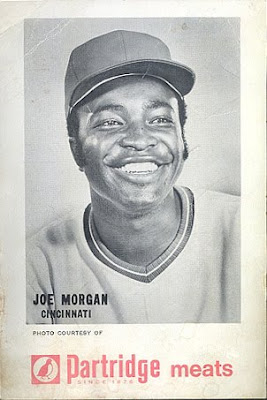 A few weeks ago I mentioned that collectors of vintage Cincinnati Reds cards and memorabilia had a better than average selection of goodies to pursue. I forget to mention how avid they are in that pursuit.
A case in point is the previously unchecklisted 1972 Partridge Meats card of Joe Morgan that sold on eBay Feb. 8.
The '72 Partridges are a smaller (in known checklist) and larger (in format) set than the more commonly encountered 1968-70 set.
The 1972 set is, like the earlier issue, blank-backed, but is 3-3/4" x 5-1/2" size. The black-and-white photo at center is a version of the team-issued player portraits, though the team logo has been removed from the cap. There is a red Partridge ad at bottom.
It is believed the Partridge cards were issued in conjunction with player autograph appearances on behalf of the hot dog company at Kroger stores in the Cincinnati area.
Prior to the discovery of the Joe Morgan card in the 1972 set, that checklist had only recorded: Don Gullett, Lee May, Denis Menke, Jim Merritt, Gary Nolan, Tony Perez and Bob Tolan. The 2010 Standard Catalog carried a NM price of 30.00 for "commons" and 60.00 for Perez. We'll revisit that pricing structure in light of the sale of the Morgan card.
In stained and creased condition, the Morgan sold for just over $450. There were five bidders over the $100 mark.
I'd guess that the number of surviving Partridge cards, in either the 1968-70 format or the 1972, is not equal for all players. The number of cards handed out would likely have been affected by such things as player popularity (that's why Bench and Rose are most often seen), the location/accessibility of the particular store in which the players were signing, and even whether or not they actually showed up at their appointed day and time.
My hat is off, once again, to the Cincinnati collectors, for their devotion to the Big Red Machine.
Posted by Bob Lemke at 3:03 PM