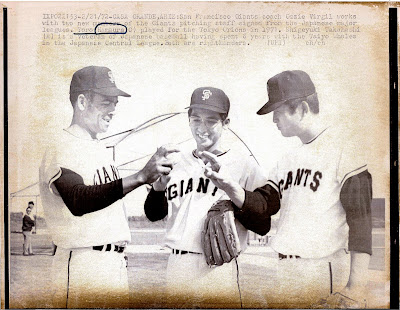 I've always had an interest in early Asian players in the U.S. minor leagues, so the picture here caught my attention when it appeared on eBay. I put in a token bid, but because the seller had not marketed the photo very well -- he didn't use Japanese in the auction title -- I was able to buy it very reasonably.

I originally thought it might make a great custom card, but I doubt that it will ever make it that far up my to-do list.

In 1964 the Giants had been the first major league team to field a native Japanese player, pitcher Masanori Murakami, who had a 5-1 record in 1964-65 and appeared on a 1965 Topps rookie card. Like many pro teams on the West Coast since the 1930s, the Giants were always on the lookout for a Japanese player who could not only help the team, but also draw fans from the large number of Japanese immigrants and their descendents.

At the center of the photo is Toru Hamaura. The 20-year-0ld Hamaura came to the Giants in mid-January, 1972, in a trade with the Lotte Orions of Japan's Pacific League for Frank Johnson, a utility player for San Francisco from 1966-1971. The deal was billed as the first international trade in Major League history. Some observers felt it was more of a publicity stunt to drum up interest in the "Friendship Series" player between Lotte and San Francisco March 24-26 in Honolulu. Johnson evidently played the 1972 season in Japan, then returned to the Pacific Coast League, playing through 1975.

The player on the right was veteran Central League pitcher Shigeyuki Takahashi, age 26. Rookie of the Year in the C.L. in 1964 with the Taiyo Whales, Takahashi had been a 21-game winner in 1968, with a 2.40 ERA.

Takahashi played only one year in the U.S., 1972 with the Giants AAA farm club at Phoenix. He was used almost exclusively as a reliever, with a 1-3 record and 4.80 ERA in 37 games.

I imagine that if I spent a few more hours on the internet, I could find more about the careers in Japan of Hamaura and Takahashi, but life's too short.

I've put the original photo back up for sale on eBay (key words Giants Japanese). I've scanned it so I can use it for a future card project if time ever permits. If you have need of a somewhat enhanced black-and-white 8x10 print of the picture, I can print it up for you for a small charge -- though postage to Japan would be high -- or I'd be happy to send you a scan if you e-mail me at scbcguy@yahoo.com.
Posted by Bob Lemke at 8:43 AM