This is the second installment about a trio of newly reported 1955 Armour coin variations. If you haven't already done so, please bring up the March 27 posting about the Jim Finigan variations. It will provide the necessary background information.
The coin we're presenting today is another variation that could go either way in terms of whether or not it wil make the final cut for listed variations in the next Standard Catalog.
Specialty collector Phil Garrou reports that the 1955 Armour coin of Duke Snider can be found in two back versions: 1) comma after the 19 in the birthdate; no decimal point in front of the 1954 batting average, and, 2) no comma after the 19; with decimal point in front of 341.
This a curious situation because each version of the coin has one error, and so far no coin has been seen with both elements correct. It strains logic to believe that if the coins' creators made a conscious decision to correct one error or the other, they would have intentionally created a new error.
That is, if someone noticed there was no comma after the 19, it is unlikely they would have added it, but deleted the decimal point. Or, if the missing dot was noticed and corrected, why would the comma have been removed?
The point on which the decision to list or not list this variation rests is whether or not the omission of the decimal point and addition of the comma were simple errors in the preparation of the back typography, or whether the decimal point and/or comma simply wore off over the course of producing the coins. Garrou reports that his studies of the Snider coin indicate about half are found with the dot and no comma, and half with the comma but no decimal point. 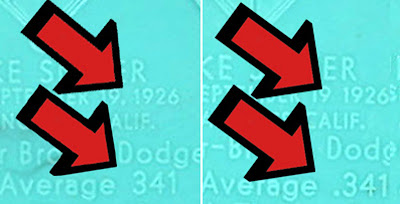 Comma, no decimal No comma, with decimal

What I'm looking for here is whether or not coins can be found with partial or diminishing comma and/or decimal point, which would indicate the variation was caused by deterioration of the mold over the production run. In such a case, I would not be inclined to list this as a variation. If however, it turns out that the decimal point and comma are an either/or proposition, it may be worthy on consideration for cataloging as an error/corrected situation. Let me know what you find.