Besides being my collaborator on the creation of a 1955 Topps-style Richie Ashburn card presented in an earlier posting, Fred McKie is one of the hobby's most knowledgeable collectors of the 1962 Salada -Junket coins.
Fred has reported three new variations to the set, and a theory about the creation of the rarest of the Salada variations.
Newly cataloged are variations of coins #9 Jim Lemon, #36 Harmon Killebrew and #46a Ryne Duren (red shirt buttons).
The most visually compelling of the trio is the Killebrew variation. In the common version, the player name and position to the left of the portrait, and the coin number and team nickname to the right are printed at an angle roughly coincident with the slope of the Killer's shoulders.
The variation that McKie has reported shows those typographic elements to be printed on horizontal planes, with the "n" of Harmon, the "w" of Killebrew and the "B" of 1B nearly touching the portrait. This variation is so rare, McKie reports, that none of the advanced Salada collectors with whom he is contact owns one or has ever seen one.
The newly reported Duren coin is a variation of a variation. The coin was first issued, as were several other Saladas, with red buttons on the jersey. This was later corrected to show white buttons.
The red-button Duren, however, is found with two distinct placemements of the player name and position to the right of the portrait. On the rare version, the name and "P" are placed at a distance from Duren's left ear, very near the blue plastic rim.

The common coin shows those elements much closer to the portrait, with the "D" of Duren almost touching the ear. The coin number and team nickname to the left of the portrait is unchanged between the variations.
Similarly, the variation discovered for the Lemon coin affects only the name and position lettering. The common version has those elements closer to the portrait, and lower, with the bottom of "Jim" lining up somewhat below the player's left ear.
The rarer coin has the name and "OF" centered between the portrait and rim, with the bottom of "Jim" aligned with the center of the ear. 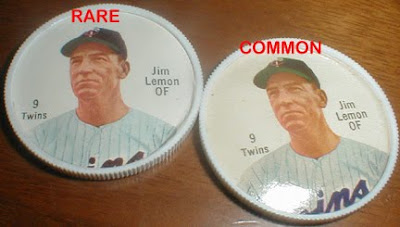 McKie believes these newly reported variations, as well as the other rarities in '62 Salada -- #48a Dick Williams (name on right), #53b Jackie Brandt (Orioles) and #113a Ed Bailey (partial left shoulder) -- represent a very early printing of the Salada coins. "It had to almost be a test run due to the scarcity of the rare coins," McKie said. "They may have looked at the test printing and made changes from that, then went ahead with the main printing" of "180" backs. The "200" backs came even later when the Mets and Colt .45s were added.
At this point, only the Killebrew coin will likely be added to the 1962 set checklist in a future edition of the Standard Catalog of Baseball Cards. The catalog introduction to the set states, "Many of the players in the 180 series can be found with variations in the placement of the front typography relative to the colored portrait. Though these variations seem to affect a tiny percentage of some players' 180 coins, they are in most cases too difficult to distinguish except by direct comparison between specimens and are of interest only to the most dedicated Salada collectors."