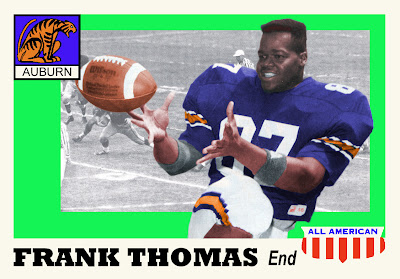 It has been an exceptionally long time since my last posting. In the interim I have made my first-ever move to a winter residence. Attempts to secure reliable internet service have been the principal reason I haven't been posting.
At my "home" office in Wisconsin, I had fast, reliable DSL internet access that I now realize I had been taking for granted. Here in central Pennsylvania I struggle to attain and maintain internet connection for both my day job and for my hobby undertakings.
Preparing for, executing, and recbounding from the move also ate up the free time I customarily would be using to work on my custom cards body of work.
I'm happy to return to this forum with a new creation that allows me to put a most satisfying red X on one of the top items on my wish list of cards to create.
Some months back I enumerated a dozen or more custom card projects that were being held in abeyance for lack of a suitable player photo. Several readers have stepped forward with either actual photos, or suggestions that will allow me to make great strides on whitlling down that wish list over the coming months.
The most welcome contribution came from Illinois collector Kraig Kahler, who was able to hook me up with a picture of Frank Thomas in an Auburn football uniform.
Kraig initially wrote that such a picture had been included in a feature in a 1991 issue of Beckett Future Stars magazine, back in the hey days of rookie-card fever and speculation.
The scan he sent from the magazine showed exactly the type of photo I had been looking for over these past many years. It appears to be a university athletic department publicity shot of Thomas in action.
While Kraig didn't want to risk breaking up his magazine collection to send me the issue so that I could make a high-res scan, he went out on eBay and found a copy of the magazine for less that $4 delivered to my door.
When I first laid eyes on the Thomas picture, the image of the 1955 Topps All-American football card of Nebraska star Bob Reynolds leapt to mind. The Cornhusker's card is o 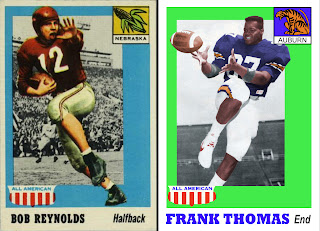 ne of the vertically formatted cards in the 1955 AA set, and features a full-length action pose. That card became the template for the Frank Thomas card I was going to add to my 1955 Updates. As you'll see, that plan eventually fell by the wayside.
My initial design involved dropping a colorized version of the Thomas picture onto the stadium background of the Reynolds card. Yet, when I had done so, the result didn't bowl me over. The image of Thomas was just too small for my liking. After looking at the card for a couple of days, I decided that cropping the photo from full-length to waist-up, and going with a horizontal format was way to go.
In making that switch, I was able to add little more than 40% to the size of the Thomas image. I believe this makes a much nicer card. After all, if I'm going to make a Frank Thomas football card, I want to make a card on which the future Hall of Famer is instantly recognizable.
With the design completed on my computer, my challenges weren't yet totally overcome. The printed I have been using for the past year or so to produce my cards gave up the ghost soon after I got it set up in my new office. After two days of fiddling with it, I determined that the print carriage was no longer functional.
That all-in-one HP OfficeJet printer had been a pain in my neck since its purchase. It had taken several days of work by real computer pros to even get the thing to work in the first place. At one point a hired tech had spent a full eight-hour day on the phone with various levels of HP techies without success. Finally the software-hardware guy at work took over control of my computer remotely and was able to bring the printer up to at least minimal functionality.
That experience had convinced me that I was not going to be buying an HP printer this go-round. After a half-day of on-line shopping, mostly spent reading customer reviews, I decided to go with a Canon PIXMA MP560. Set up was relatively painless, and I've been plased with the first color card images that have been forthcoming. As a bonus, this printer has an optional back feeder that may allow me to begin actually printing on card stock; I'll be experimenting with just how thick a stock it will digest in the coming weeks.
Ultimately, the ability to print my card fronts on cardboard stock could greatly reduce the time it takes for me to bring my efforts from a computer concept to a card in hand.
In any case, I am able to be back in production with my custom cards. That will make the gray days of winter go by much more pleasantly. 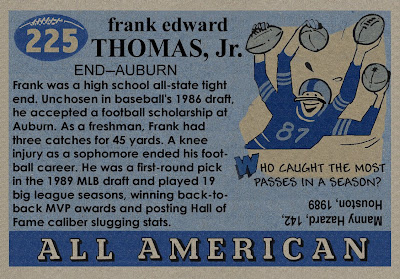