Honest, I don't make decisions on which newly reported variations to add to the Standard Catalog of Baseball Cards on the basis of what will consternate the greatest number of collectors.
But one of the most recently reported varieties, which just got in under the wire for the 2012 edition, involves a popularly collected Topps ancillary issue and the most expensive player in the set.


Levi Bleam of 707 Sportscards has confirmed the existence of two different back color variations of one of the Mickey Mantle variations in the 1964 Topps Tatoos. (Does anybody else wonder why Topps spelled it "Tattoo" in 1960 and "Tatoo" in 1964?)
The 1964 Tatoos are actually the 1-9/16" x 3-1/2" wrapper for a piece of bubblegum. The "front" is a reversed artwork portrait of a player or team logo, that could be moistened and applied as a temporary tattoo. The back is the colorful outside of the wrapper with instructions.
It has only been in the past 10-15 years or so that the catalog recognized the existence of four front variations in the set, all Hall of Famers: 1) Harmon Killebrew can be found with a green or red background, 2) Sandy Koufax can be found with either a horizontal or diagonal bank of color behind the portrait, 3) Willie Mays can be found with a yellow band behind the portrait that either encompasses the portrait or only extends from his ears to his chin, and, 4) Mickey Mantle can be found with either a diagonal yellow band behind the portrait or a red triangle. 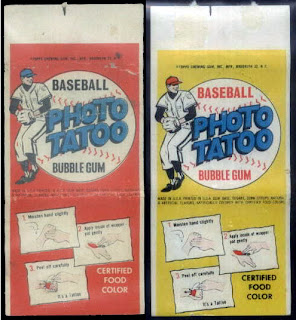 It is the latter Mantle tattoo that is the subject of the recently verified variation. Bleam, who probably holds in inventory more 1950s-1960s mainstream Mantles than any other dealer, has discovered that the "red triangle" Mantle can be found with the overall color of the "back" (the side with the advertising and instructions) printed in either red or yellow.
According to Bleam's informal surveying, the yellow-back version is considerably scarcer than the red. Once more collectors are made aware of the variation and more reports of relative scarcity are forthcoming, Bleam said he expects the value of the yellow-back version could settle in at around 2-3X the red-back version. The Standard Catalog currently lists both the Mantle yellow band and red triangle types at $325 in Near Mint.
Posted by Bob Lemke at 4:49 PM