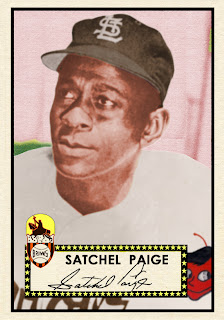 From his unique nickname to his list of rules to live by to his dazzling assortment of -- legal and otherwise -- deliveries to his true age, baseball had never seen, and will never see again, a character the like of Satchel Paige.

You can google him all day and never tire of what you find. There are several excellent books available.


During his playing days, especially after Bill Veeck signed him in mid-1948 for the successful pennant drive, the big question about baseball's oldest rookie was his true age. Veeck himself claimed that his research showed that Paige could not have been born after 1900. I went for the 1908 birthdate that Topps used on its 1953 card.


For almost as long as I have been making custom cards, I have been setting aside photos of Paige for eventual use on cards that never were.

As big a drawing card as he was for more than 40 years, and as much of a fan favorite as he was, there are precious few "real" career-contemporary baseball cards of Paige. He was included in Bowman's and Leaf's 1949 sets as a Cleveland Indian, and in 1953 Topps as a St. Louis Brown. He appears in a number of 1948-49 Indians' team-issued picture packs and there are several other legitimate 1940s collectibles.

I'm currently planning to do at least five "tribute" cards of page. The first is presented herewith, in the style of 1952 Topps. Keep watching this blog for my future Paige cards. 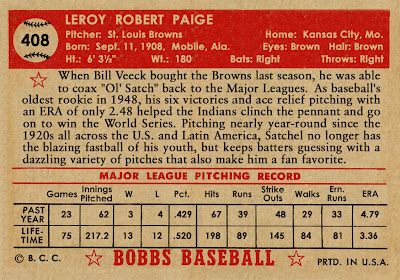