One of the first six or eight cards I created for my "updates" to the 1955 Topps All-Americans was a card for Bronko Nagurski.

Many collectors find it hard to believe that Topps did not include Nagurski among the 100 cards in its original 1955 issue.


While I don't know the specifics, I'd guess that Nagurski's omission probably had something to do with contractual arrangements relative to his professional wrestling career. He may have been under exclusive contract that kept him out of the Topps college football set.


So, Nagurski was a natural for my set, even though his gridiron career at Minnesota and Chicago put him across the line of scrimmage from the Wisconsin Badgers and Green Bay Packers, albeit well before my time.


I never felt that my Nagurski card was one of my best efforts. The action photo that I used was somewhat fuzzy and was a picture that is often seen.

Thus, when I found a very nice portrait of Nagurski on the internet a year or so ago, I decided that some day I would re-do my Nagurski card. That day came over the 4th of July weekend. I colorized the portrait and revamped both the All-American shield and the player name and position on front.

I'm much happier with the new version. 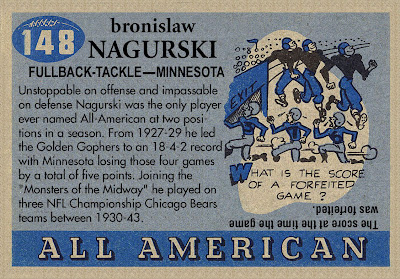