A career-summary card for Koufax 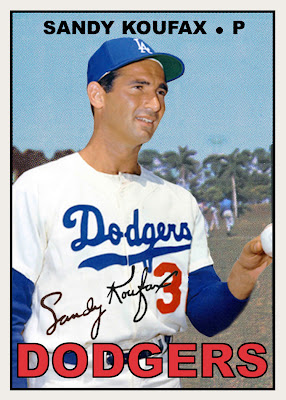 As I mentioned yesterday, my card collecting days had gone on hiatus by 1967. My little brother was just beginning to get into cards, so I could look at his new cards every year and get a feel for what was going on at Topps.

I showed you the custom multi-player feature card I created, "All-Star Starters," with Sandy Koufax and Denny McLain.


Working on that project, I determined that there was yet another card to be coaxed from that photo. Back in the 1960s, Topps seldom showed any sentimentality regarding a player's career. If the gum company had enough advance notice that a player was leaving the game, they simply omitted him from the next year's set.


Thus many players, even superstars of the game, did not have a "final" card, the stats on which would provide a career summary. Such was case with Sandy Koufax. He announced his retirement shortly after the end of the 1966 World Series in which the Dodgers were defeated by the Orioles. So Topps never put a Koufax card into its 1967 set, a decision that latter-day collectors have lamented.

Several other custom card makers have tackled a 1967-style Koufax card, so I never felt any great "need" to add one to the body of my work. 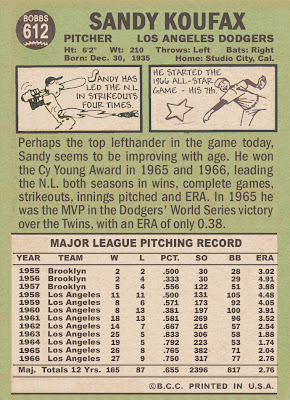 When that great photo of Koufax at the 1966 All-Star Game came my way, however, I began to tinker around with ideas on how it could be worked into a single-player Koufax card in the 1967 style.

You'll notice that I took the figure of Koufax out of its original context. After looking at other Dodgers cards from 1967, I decided that a spring training setting would have been appropriate.


For the background to the left of Koufax and the blue sky, I used the '67 card of Bruce Brubaker. To the right of Koufax, I adapted the background from a 1973 Don Sutton card. The autograph was picked out of the 1959 Topps Koufax card.

The cartoons on back were adapted from the '67 Brubaker and the 1973 Nolan Ryan.

Putting all those pieces together resulted in what I consider to be a pretty fair approximation of what Topps might have done if Koufax had been included in its set nearly a quarter-century ago.