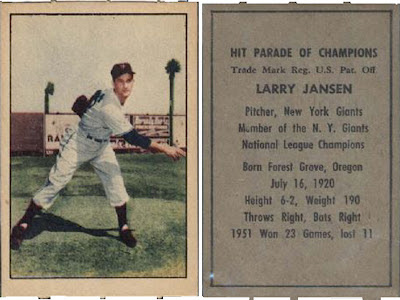 As I kid, I had only ever encountered a single Berk Ross card; a 1951 Warren Spahn that my older brother Tom had picked up somewhere.


Though that '51BR Spahn never made its way into my collection back then, I never forgot the image on that card. When I got back into collecting in the late 1970s, that card was always somewhere on my mental want list. A couple of years ago, when the planets (the availability of a nice example on eBay and some money in my PayPal account) aligned, I scratched that itch and bought a replacement.


Still, even after being involved in the card hobby professionally for more than 25 years, I was left with a basic unanswered question: From whence did the Berk Ross cards come?


It has been well-known in the hobby for decades that the 1951 BR cards were issued in two-card perforated panels, in four windowed boxes, containing nine panels each. The entire set  comprises 72 cards, with 40 baseball players and an assortment of college football and basketball players, NHL skaters and boxers.


It has always been assumed that these boxes were sold as a stand-alone product.


In 1952, the Berk Ross name disappeared from the cards, though the "HIT PARADE OF CHAMPIONS" title remained. Also disappearing for 1952 were non-baseball subjects -- all 72 of the '52BR cards were MLB players.


The 1952 Berk Ross cards were larger, at 2" x 3" than the '51s, and like the earlier issue, were printed in panels or, more likely, strips that were originally perforated at top and bottom. The strips, however, were separated before the individual cards were placed into paper wrappers.


Again, it was assumed hobby lore that these one-card packs of 1952 Hit Parade ballplayers were sold as a stand-alone product.


Because of the heavy concentration of Yankees, Giants and Dodgers in the set's composition, and the survival of cards in that part of the country, it was also presumed that the BR cards were regionally distributed in the Northeast. (How that lone Warren Spahn '51 made its way to Fond du Lac, Wis., in the mid-1950s will likely always remain a personal mystery.)


In perusing microfilm of 1952 issues of The Sporting News, I think I found some answers . . . and some interesting background of the 1952 Berk Ross baseball cards.

SEVEN GIANTS POP POPCORN
Two popcorn firms have been asked by Supreme Court justice Samuel Gold of to show cause why they should not be stopped from placing pasteboard photographs of seven members of the Giants inside bags of their product. Larry Jansen, Bobby Thomson, Sal Maglie, Wes Westrum, Montia Kennedy, Dave Koslo and Bill Rigney also instituted action to recover $50,000 each from the companies on the ground that their pictures were used without their consent.

Upon reading this item, I was originally intrigued by the thought that it might refer to an obscure, as yet uncataloged, baseball card issue. After digging around on the internet for a couple of days (ain't it great to be retired?), however, I discovered that Jansen and his teammates were sore about the cards we now know as Berk Ross.

Represented by sports and entertainment attorney Jones J. Shapiro, who lawyered for Haelan Laboratories (Bowman Gum) in its landmark suit against Topps  in 1953, the Giants players on Aug. 14, 1952, obtained a show-cause order to prohibit the use of their images to sell non-baseball related products without their permission.

Besides the popcorn mentioned in the TSN article, the legal paperwork also mentioned that the baseball cards were being distributed with gum. Perhaps the purchase of a piece or pack of gum entitled the buyer to a wax-wrapped card.

Defendants in that and subsequent legal proceedings were a group of legal entities apparently all owned or controlled by Harry Horowitz: Model Airplanes, Inc., Hit Parade, Inc., Hi Lo Packing Co., (the name that appears on the card wrappers) and Theater Concessions, Inc. They appealed the lower court's Nov. 14, 1952, refusal to dismiss the players' suit. 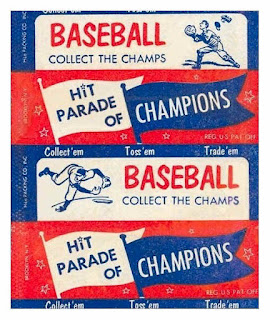 I'm sure there is lots of interesting hobby-related legalese to be found about this case, especially if you're connected to some of the paid legal internet resources. Some of the articles I found indicated that the Jansen, et. al. case and its issues of the status of ballplayers as public figures and a person's right to control and profit from distribution of his image was more or less lost in the larger Bowman v. Topps case.

The net result of the proceedings seems to have been that on Nov. 17, 1953, the First Department, Appellate Division of the Supreme Court of the State of New York confirmed the lower court's enjoining of the Hit Parade card distribution and the "$20 costs and disbursements to the respondents" apparently assessed against the Horowitz empire.

The double sawbuck that each (presumably) of the named plaintiffs received seems to have been all the vindication that the court saw fit to award, not the $50,000 that had been originally sought. Who paid Shapiro's fees in the case was also something I didn't uncover in my cursory research.

Thus, it appears that the 1952 Berk Ross baseball cards -- including the multi-thousands of dollars Mickey Mantle card -- were the "broders" of the early 1950s.