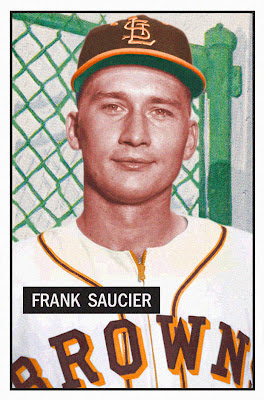 Frank Saucier had one of professional baseball’s most unusual careers. He was a true minor league superstar who could not carry that success into the major leagues and who is best remembered for the time he was lifted for a pinch-hitter.

His career was never marked with a baseball card issue. After reading about him in contemporary Sporting News accounts, I decided to create a custom card for him.

For the 1950 season, The Sporting News selected Frank Saucier, an outfielder in the St. Louis Browns system, as its Minor League Player of the Year.

Saucier’s selection was based on his .343 batting average with the San Antonio Missions, the Browns’ Class AA team in the Texas League. Saucier’s mark was tops in the circuit.

The accompanying photo in the Jan. 3, 1951, issue was bracketed with the headline, “Mr. Slug,” and the tagline “Missions’ Mighty Mauler”.

TSN opined that the perennially cash-strapped owners of the Browns, Bill and Charley DeWitt, could “put this 18-karat gold prospect on the auction block and come away with a tidy sum. Although he has never played in a major league game,” the paper continued, “Saucier probably would bring as much in the open market as any player in the organization.”

In writing the player profile of the POY, San Antonio sports writer Dick Peebles said, “If the Browns can get by for a couple of years and not part with Saucier, they may come up with the greatest individual drawing card they’ve had since George Sisler.”

Peebles described the 23-year-old Saucier as a “tall, handsome lad with the boyish face and crew haircut.” He said the kid had the attention of “everyone, all major league clubs included,” because of his “amazing ability to sock a baseball hard, often and to distant places.”

The Browns had signed Saucier in 1948 after he graduated with an engineering degree from tiny in As a junior, Saucier had hit .519, a record in the Missouri College Athletic Union. The college’s baseball field is named for him.

He broke into pro ball with in the Class D Illinois State League as a catcher. He batted .357 that season.

He jumped to Class B ball with for 1949. There he led the Big State League – and all of Organized Baseball – with a .446 average, winning the Hillerich & Bradsby Silver Bat award. That batting mark was 60 points higher than the runner-up.

His 1949 performance also earned him a trip to spring training with the Baltimore Orioles in 1950. The O’s weren’t a major league team then, they played in the Class AAA International League. Because the Orioles were well-stocked behind the plate, they sent saucier to .

Missions’ manager, former Browns middle infielder Don Heffner, was also good on catchers, but he needed a left fielder, so he began the process of converting Saucier to an outfielder.

Learning the ropes as a flychaser, as Peebles put it, Saucier’s batting suffered and he went hitless in his first 10 trips to the plate. He quickly overcame that slump, however, and by mid-season was belting ‘em to the tune of a .375 average.

A couple of nagging injuries (he knocked himself unconscious chasing a line drive into an outfield fence, injuring his shoulder) caused his batting average to drift down to .340, as well as to miss the Texas League All-Star Game, to which he had been an overwhelming choice for left fielder.

He finished the regular season with 151 hits, including 23 doubles, 12 triples (three of them successively in one game) and nine home runs.

In winning the Texas League playoffs and the subsequent Dixie Series against Nashville, champions of the Southern Association, Saucier hit .408 in 17 games.

In the off-seasons, Saucier was employed by the George F. Martin Oil Co., , where he was being groomed for an executive position. Despite his success on the ballfield, Saucier was quoted as saying that he wasn’t sure he wanted to make a career of playing baseball. 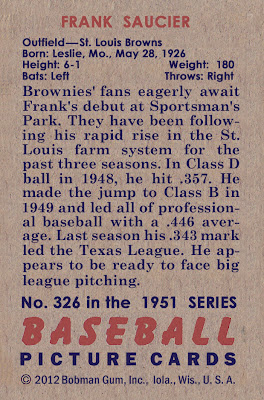 Saucier was married during an off day in the Dixie Series in 1950, and honeymooned in , where he played winter ball.

The Browns claimed his contract for 1951, intending to bring him to spring training, where manager Zack Taylor would convert him to a first baseman.

Holding out for a significant cash bonus, Saucier refused to report to the Browns and on April 17, was put on the suspended player list for failure to report and sign a contract. Unlike many ballplayers in that era, Saucier had options.

An oil well in which he had an interest came in a gusher and Saucier was doing well working the oil fields around He kept his hand in baseball by helping coach the local American Legion team.

One of the first things on Bill Veeck’s things-to-do list when he acquired control of the St. Louis Browns midway through the 1951 season was to come to terms with erstwhile minor league batting champion and then-current Oklahoma oilman Frank Saucier.

In the days just prior to and just after his assuming ownership of the cellar-dwelling and attendance-challenged Brownies on July 5, Veeck had circulated through the grandstand and bleachers at Sportsman’s Park to seek fan input on what they wanted from the team.

Repeatedly he was asked about the status of Saucier. Veeck said at least half the fans he spoke with asked what he was going to do about the holdout.

Veeck got on the phone on the night of July 4 and at 1:30 a.m., finally tracked Saucier down at the home of his parents in , Veeck urged Saucier to hop into a car with his wife and come to .

When Saucier demurred, Veeck told him to sit tight and he (Veeck) would be right out. He hired a limousine and driver and an hour later he was sitting in the Saucier’s living room. An hour after that he had persuaded Saucier to agree to terms. By 4:30 a.m., Veeck was on his way back to where later that day he dotted all the i’s and crossed all the t’s to formalize transfer of the team.

Veeck had recognized that getting Saucier into a Browns’ uniform would energize the fan base and help him improve on the team’s miserable gate showing of just 108,000 paid attendance at the all-star break.

“I like Saucier’s attitude,” Veeck was quoted, “He likes to play ball, has a lot of confidence in himself but is quite reserved in discussing his own ability. I’ve watched him work out and I like him more every time I see him swing that bat.”

Bringing Saucier into the fold might not have guaranteed that the Browns could improve on their 23.5 game deficit in the American League but it would make the turnstiles hum.

It was the same motivation Veeck had in his stealth campaign to bring Satchel Paige back into the major leagues. Veeck had first brought Paige into Organized Baseball while he was owner of the Cleveland Indians in 1948. The ageless pitcher was instrumental in the Indians’ World’s Championship that season. After Veeck was forced to sell the team in his divorce settlement in 1949, Paige had returned to lucrative barnstorming, which baseball experts speculated had netted him $50,000 a year.

In 1951, Abe Saperstein, who owned both the Harlem Globetrotters and the Chicago American Giants of the Negro American League, had convinced Paige to forsake the road for a berth on his team. Veeck was almost certainly behind this tie-up as it gave him access to Paige’s services at a moment’s notice. It was no coincidence that when Veeck put together his ownership group for the purchase of the Browns, Saperstein was one of the team’s 16 stockholders.

Saucier made his major league debut against the Yankees on July 21, grounding out as a pinch-hitter. His first start came in left field the next day in the first game of a doubleheader. He grounded out twice, struck out and walked in four tips to the plate; he also made two errors in left field.

Veeck appeared nonplussed, “I’m positive Saucier will hit for us,” he said. “I saw him enough in the Texas League and he’ll hit plenty to all fields. And don’t forget, this is his spring training period,” Veeck alibied.

Just as often happens with phenoms in their first big league “spring training,” Saucier failed to live up to expectations. Whether it was because of the long holdout, the fact that his oil interests robbed him of focus and ambition to make a mark in the major leagues, or reported nagging injuries,  Saucier went down in flames.

For the rest of the season, Saucier was used mainly as a pinch-hitter and pinch-runner.

On Aug 7, he garnered his only major league hit, a pinch-hit double off the Indians’ Mike Garcia in a 5-1 Browns loss.

He got only his second start in the second game of the Aug. 19 doubleheader at . After opening the game in right field, he was due to lead off the bottom of the first when he was lifted for a pinch-hitter: Eddie Gaedel.

Frank Saucier was the unwitting fall guy in Veeck’s most famous stunt. In his book, Veeck, as in Wreck, the Browns owner said, “This is the only part of the gag I feel bad about. Frank was a great kid with great promise and all he is remembered for is being the guy the midget batted for.”

A week later he got is third and final start. His lifetime major league record stands at 18 games, with 14 at-bats. Besides his lone hit, he walked three times, one of them bringing in his only RBI and leading to his only big league run. He struck out four times and was hit by a pitch once.

Saucier’s baseball career came to an end in 1952 when he was called back into service for two years with the U.S. Navy during the Korean War. During World War II, Saucier had served nearly three years. At age 18 he had been one of the youngest officers ever commissioned by the Navy. He served on the U.S.S. Barnstable and was part of the Navy’s V-12 rocket program.

After the Korean War, Saucier returned to civilian life, first in the oil business, then as vice president of the () Savings and Loan Assn.

Publicly, Saucier took his role in the Gaedel debacle gracefully. Teammates, however, have since told baseball researchers that he was not happy with that legacy.

Frank Saucier’s baseball legacy did not include any card issues. My 1951 Bowman-style custom card is an attempt to rectify that oversight. If the background of the card looks familiar to vintage card collectors, it is because it was seen on teammate Ned Garver’s card in the ’51 Bowman set.

I wonder how Frank pronounced his patronym? In a 1950 article in TSN, the pronunciation was phonetically given as "saw-shay." In poking around a genealogy site, I discovered that different branches of the family pronounce it: a) so-sure, b) so-shay, and c) saw-see-yay.