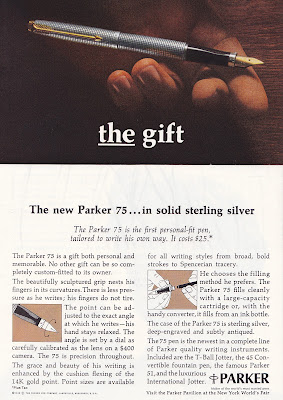 I was paging through a 1965 issue of National Geographic a while back and saw an ad for a high-end Parker fountain pen.

Crafted in "solid sterling silver" with 14K gold point (probably plated, rather than solid), the pen was priced at $25.

According to an inflation calculator on the internet, those 25 1965 dollars would be the equivalent of $171 today. Does anybody pay $171 for a pen today? I'm sure some people do, but they probably read The Robb Report rather than Nat Geo.

Those people who did buy Parker 75s, or receive one as a gift, in 1965 had a pen that has held its value surprisingly well. According to recent sales of the pen on eBay, New In Box, or nearly new sterling Parker 75s sell for $75-200.

A new Bic ballpoint, or at least its generic equivalent, sells for about the same 19 cents as in 1965.