Casey's suicide was a dick move 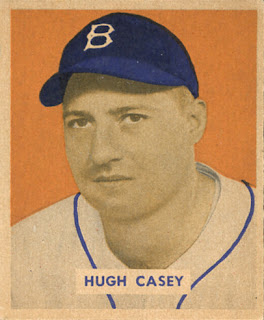 I ‘m not qualified to judge what drives any man to eat his shotgun. If and when an individual determines that his life must end, I’m going to give him the benefit of the doubt and assume he has weighed the alternatives as well as the consequences for those he leaves behind.

However, I may well pass judgment on the manner in which a suicide is carried out.

And for my money, former major league pitcher Hugh Casey’s suicide was a dick move.
I don’t pretend to know what is too much for any man to bear, but I do know that it is never alright to check yourself out in a manner that causes family and friends more heartbreak than necessary.

Casey’s last phone calls may have been the proverbial “cry for help,” but to my way of thinking they crossed a line.

On July 3, 1951, Casey committed suicide in an hotel room, shooting himself with a shotgun. His estranged wife, Mrs. Kathleen Casey, listened to the shot over the telephone.

Prior to pulling the trigger, Casey had telephoned a close friend, Gordon McNabb, an real estate dealer, shortly after midnight advising him to come to the hotel. Casey told McNabb, “You’ll see me, but I won’t see you.”

McNabb, upon his arrival at the hotel, tried to call Casey’s room, but the line was busy.
Rushing to Casey’s hotel room in an effort to prevent the suicide, McNabb reached the door just as Casey fired the shot.

McNabb ran downstairs to get help, returning with a bellhop and a policeman. When they entered the room, Casey was sprawled face down, the telephone receiver still in his hand, a 16-gauge shotgun was at his side.

Officer J.M. Bagwell picked up the receiver and asked the operator for the number Casey had been connected with. He called the number and Mrs. Casey answered. She said that she had been talking with her husband and that he told her he was going to kill himself.

“I begged and pleaded with him not to do it,” Mrs. Casey said. “I tried to tell him that was for God to do and not for him to do. But he said he was ready to die . . . that this was his time.

“He was just as calm about it as if he was about to walk out on the ball field and pitch a game.”
According to a report in The Sporting News, “Mrs. Casey blamed the pitcher’s suicide on a paternity suit in last December in which he had been ruled the father of a one-year-old son born out of wedlock to Hilda Weissman, a 25-year-old brunette. Miss Weissman alleged that she had spent four nights in a hotel room with Casey early in 1949.”

His last words, according to his wife, were: “I am innocent of those charges.”

Mrs. Casey insisted that the paternity suit “had nothing to do with our separation.” She said at that time that she was sure he was “not guilty of being the father of this child,”
Casey was ordered to pay $102 “laying in” expenses and $20 a week child support.

She said her husband told her that he felt “all dead inside.”

According to the TSN article, W.M. Mobley, the bellboy, said Casey had told him that he was going to kill himself because a doctor told him he had only 10 days to live because of “a leakage of the heart.”

A comprehensive biography of the pitcher can be found at the SABR online biography project: http://sabr.org/bioproj/person/312ca33d .

In 1935 he had earned a promotion to the major leagues with the Chicago Cubs, appearing in 13 games as a relief pitcher.

After three more seasons in the minors, Casey returned to the bigs with the Brooklyn Dodgers. In his first big league start on Decoration Day, 1939, he handcuffed the Giants at the Polo Grounds and beat Carl Hubbell 3-1.

Casey was the losing pitcher in Game 4 of the 1941 World Series when Mickey Owen dropped the third strike and Tommy Henrich reached first base.

In 1947 he was 10-4 to help the Dodgers to the pennant. He set a record by appearing in six World Series games. He got credit for two wins but the Yankees won the Series four games to three.

After receiving his unconditional release from the Yankees in 1950, Casey returned to and spent his last diamond days there. He won 10 and lost four in 1950, when the Crackers won the Southern Association pennant.

His last pitching gig was with the Brooklyn Bushwicks in a semi-pro game on May 13, 1951, when he gave up four hits in five innings.

The former Dodger pitcher was buried beside his parents in the in , on July 4. Two former Dodger teammates, Dixie Walker and Whitlow Wyatt, then with the Crackers, were among the pallbearers, and members of the team formed an escort.

At the time of his death he operated a steak house and bar at in . He had appeared in his bar for the last time a week before his death, telling friends he had to travel to on a trip that would cost him “ten grand,” referring to the IRS judgments. Raising a glass to Casey at his bar afterwards, one customer said, “Ten grand would have been cheap, compared to what he paid.” Another customer reflected that Casey was “kind to everybody except himself.”