Mays was 'Jackie Robinson' of Inter-State 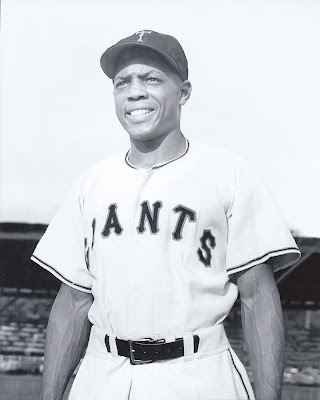 I learned something I never knew about Willie Mays when I found a notice about his debut in Organized Baseball in the July 5, 1950, edition of The Sporting News. I had not known that Mays was something of a “Jackie Robinson” in that he integrated a minor league.

The lead item in the “Class B Minor League Highlights” roundup column in that issue was headlined “Giants Outbid Five Clubs for Mays, Negro Prospect”.

With an outlay of $15,000, of which the Birmingham Black Barons will receive $9,000 and the player $6,000, the New York Giants outbid five major league clubs for the services of Willie Mays, 19-year-old Baron center fielder, He has reported to the Giants’ farm club.
In his first nine home games with the Black Barons, Willie was hitting .394, including six doubles, one triple and one homer in his 13 hits in 34 times at bat. He also had two assists from center field.
Eddie Glennon, general manager of the Birmingham Southern Association club, believes Mays could be converted into a pitcher because of his powerful right arm, but Willie’s manager, Vic Harris, kept him in the outfield because he wanted to use him every day.
Mays was the first Negro to play in the Inter-State League, making his bow in the outfield for , June 24. He went hitless the first night, but beat out a couple of infield hits the next day.