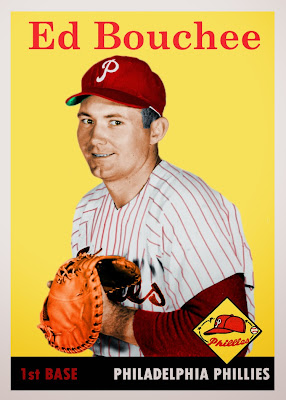 Nearly two years ago I created a custom 1958 Topps-style card of Ed Bouchee, filling a gap that Topps had created when it checklisted, but never printed a 1958 card for the Phillies first baseman.

While I was basically satisfied with my creation, I was always somewhat dissatisfied with having had to use the photo from the 1960 Topps Bouchee card.

Some months ago I found a great team-issued posed portrait photo of Bouchee and decided to have another go at a 1958.

While I could have simply replaced the player picture on my black-background earlier card, I decided to explore options.

In the 1958, Topps used five different background colors on its Phillies cards: light blue, blue, black, orange and yellow. I chose yellow for my new Bouchee.

While looking over original 1958 Phillies cards I noticed for the first time that Topps used four different versions of the team name, apparently depending on the length of the position designation that shares the bottom color bar. The team can be found as PHILA. PHILS., PHILA. PHILLIES, PHILADELPHIA PHILS., or PHILADELPHIA PHILLIES.

This should conclude my efforts at adding Ed Bouchee to the 1958 Topps issue.

Reprinted below in my blog posting from March 27, 2012, in which I introduced my first Bouchee card.

Kids looking to complete a set of 1958 Topps baseball cards back in the day were confounded by the inability to locate card #145, Ed Bouchee.

I'm not going to go into the reasons Topps did not issue the card. It's a sad story that serves no purpose in the retelling.

Even today, some collectors are not 100% certain that Topps did not print the Bouchee card and that at least a few made it into gum packs. I'm of the opinion that the card was never printed. If it had been on the Second Series press sheet, I'm certain that at least a few would have slipped out. Despite internet rumors to the contrary, nobody has ever seen an authentic '58 Topps Bouchee.

In the remaining five years of Bouchee's major league career, he never again matched his '57 hitting numbers, and ended big league days as a member of the original 1962 N.Y. Mets expansion team.

With the exception of 1958, Bouchee appeared on Topps cards every year between 1957-62.

It may be coincidental, but the only other major multi-team baseball card issue of 1958, the Hires Root Beer carton stuffers set of 76, also has an unissued card. There is no card #69. However, since there is also no checklist, we'll never know if Bouchee was intended to be part of that set.

For my custom card, I chose to go with the dramatic black background that, if my memory serves me correctly, was only seen on Phillies cards in the 1958 Topps set. I liked those as a kid, and I like them now. 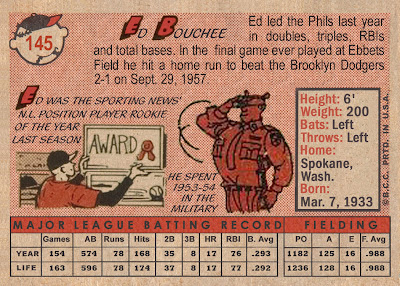