After putting in the work on a 1960 Topps-style card of Ted Williams (see my blog entry for Nov. 28, 2013), I decided to get some further use out of the template I'd made to create a Jackie Jensen card.

You can't fault Topps for not having issued a Jensen card in its 1960 set; spring training was nearly underway when Jensen announced he was retiring from the game.

I provided some details of that event in my posting of July 8, 2012, when I unveiled my 1955 Topps All American-style Jensen football card. I'll repeat it here . . .

Jensen told Gowdy “there isn’t a chance” of his returning to the team. “I want the  fans and the Rex Sox organization to know that I hope I haven’t hurt them by retiring. It’s something I just had to do. If I’ve hurt any of the baseball people or the fans, I’m sorry. I certainly didn’t want to hurt anybody.”

In a contentious session with  baseball writers on May 21, team owner Tom Yawkey, perhaps sensing it wise not to burn any bridges, said the retirement of Jensen had “obviously” hurt the team. 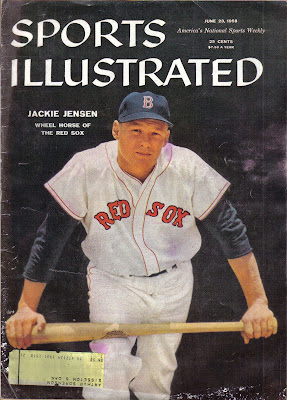 Though Topps did include Jensen in its regular 1960 set, he was part of the 1960 Bazooka box-bottom set that year. It is my recollection that the Bazooka cards were prepared in those years ahead of the Topps brand.

When Jensen returned to the game for 1961, Topps welcomed him back with three cards in its regular set; there was a "regular" card in the high-number series, a card in the MVPs subset and a multi-player "Beantown Bombers" feature card shared with Frank Malzone and Vic Wertz. Jensen was also on a Topps stamp insert that year.

The color photo on my custom '60 Jensen is a closer-cropped version of the picture that appeared on the cover of the June 23, 1958, issue of Sports Illustrated.

It's ironic that since the 1960 Topps set was one of my favorites during childhood and as a latter-day collector it took me so long to create a couple of my own. Perhaps there will be some more in the future. 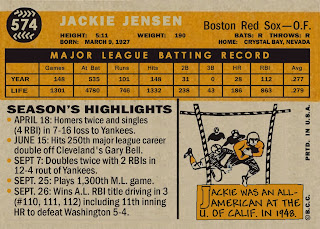