During the Third War Loan bond drive in late 1943, Lou Gehrig’s mother, Mrs. Christina Gehrig, donated one of her late son’s gloves to be auctioned.

Details I found in a subsequent issue of The Sporting News are sparse, but it was reported that the buyer, identified only as “(a) Mr. Weinstein” was the winning bidder, pledging the purchase of $50,000 of war bonds. 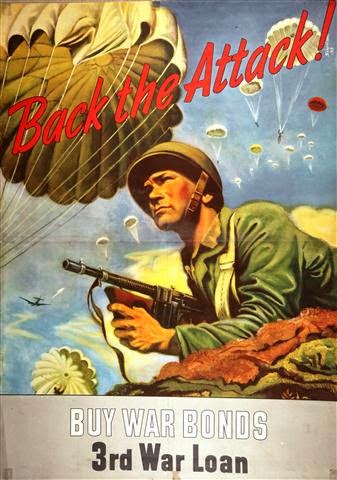 He then returned the glove to Mrs. Gehrig.

“Wasn’t that mighty nice of Mr. Weinstein to return it?” Mrs. Gehrig was quoted. “He thought that I should enjoy having it back. I surely did appreciate it, and thanked him and Mr. Dave Elman, another prominent New Yorker, heartily.”

There was no explanation of who either Weinstein or Elman were.

During World War II, bonds were sold at 75% of “face” value, for which they could be redeemed in 10 years. Thus Weinstein’s cash outlay for the Gehrig glove would have been equivalent to about $498,500 today, according to a popular inflation calculator found on the internet. He would, of course, recoup
the full $50,000 when the bonds were redeemed a decade later.

The glove may be the same bronzed mitt now displayed in the Hall of Fame, bequeathed to the National Baseball Museum in Mrs. Gehrig’s will.

To help kick off the 5th War loan bond drive in Chicago in June, 1944, a Mickey Cochrane model bat that had been autographed by members of the Navy's powerhouse service team, the Great Lakes Blue Jackets -- which over the course of its existence 1942-45 included 68 major leaguers, including 18 All-Stars and five future Hall of Famers -- was auctioned for $5,000. A bat that Jimmie Dykes had used in the 1929 World Series went for $2,000, and a pair of spikes from George Case, who led the American League in stolen bases each season 1939-43, also sold for $2,000.

Next time I'll give you the story of how another piece of Lou Gehrig memorabilia became the most valuable piece of sports memorabilia when it was sold in a World War II bond drive.