The reprint of an Advertising Age article in the May 9, 1962 The Sporting News provides today's collector with some insights into the 1962 Post cereal and Jell-O box-back baseball card issues . . . along with a coupe of other contemporary baseball card sets.

I'm going to reprint the article in its entirety; I'll have a few keyed notes at the end.

Advertising Age, National Advertising Weekly: “Come this summer, the bubble gum set will be swapping two Mickey Mantes for one Roger Maris – off the back of a box of Post cereals, or Jell-O.”
“Post division of General Foods has gone into the baseball card business in a big way. In fact, its projected 1962 output of 800,000,000(1) cards is just about as many as Frank H. Fleer Corp., of Philadelphia, Pa., will circulate among small fry via bubble gum packs.(2) But Fleer and its arch rival, Topps Chewing Gum Co., Brooklyn, N.Y., balked at the suggestion that Post might steal their seasonal thunder. 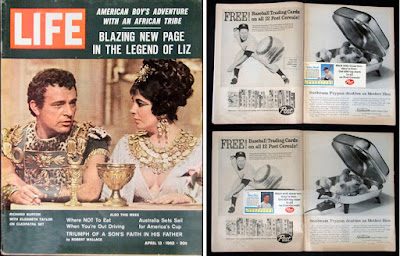 “Post’s big league jump into baseball this year came with a page in the April 13 issue of Life. The ad offered free baseball cards printed on the backs of 12 Post cereals that are sold nationwide. Protruding from the gutter of the page was a four-color insert imprinted with the first two cards to get the kids started. The heroes: Sluggers Maris and Mantle.
“The Life ad is the only print page which Post cereals has on tap this season. But the rest of the push—all TV announcements—is pretty hefty compared with Post’s drive in 1961, when it used TV sparingly (no magazines) and printed 400,000,000(3) cards. This year, for 15 weeks, the company had its agency, Benton & Bowles, line up 20, 40, and 60-second commercials on 240 stations in top markets. Messrs. Mantle and Maris are on deck for the announcements, as are Pitcher Whitey Ford and his son.(4)

“In addition, Post is armed with heavy in-store promotion to back the drive. It will use whirl-around displays, over-wire pennants (with team names), “humorous” player cutouts, stick displays, banners and shelf talkers. To show dealers how they should work with these tools, Post has issued a 60-page merchandising guide.(5)
“Post will print anywhere from three to seven cards on each of the 12 cereal packages, totaling 96 card panels. Some 200 different major leaguers will be rotated on the panels so that, regardless of which Post cereal a family buys, “each youngster can acquire a full set.” The players are split up evenly among the 20 teams in the National and American Leagues (‘although’ a General Foods man admitted to Advertising Age, ‘spring training swaps kind of threw this balance out of kilter’).
“On the Jell-O front, General Foods has just started testing baseball cards in Chicago for its Jell-O gelatin products and regular, small-size pudding.(6) One card appears on the back panel of each package. Thus far, media buys for this test have been confined to Sunday comic sections and some TV announcements through the Jell-O agency, Young & Rubicam. General Foods declined to say whether it would expand the ball cards promotion to other products. 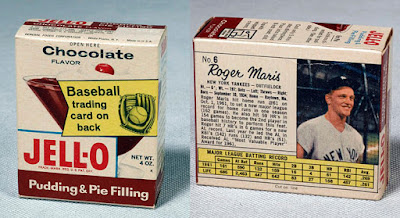 Under an arrangement the company made with Frank Scott, a New Yorker who represents ball players in such transactions, Post has the rights to use a total of 500 players. It made the same deal with Mr. Scott last year. He declined to spell out how much each player will receive. ‘I don’t think it would be fair to General Foods to disclose this,’ he said.
The gum marketers, who have had a promotional stranglehold on baseball cards for decades, for the most part appeared undisturbed—officially—over Post’s move. Melvin Poretz, advertising manager of Topps, said that General Foods’ Post Division is ‘operating in an altogether different field; our rights lie in the confectionery area.’ Topps, he said, is delighted that the ball players have a chance to make some extra money.
“Raymond Beck, Fleer’s director of marketing, termed Post’s action ‘still new.’ He said Fleer is watching it closely, but doesn’t know how it may affect the company. ‘This season will tell us the story,’ he opined. Besides baseball cards, Fleer backs football and basketball cards with its gum (five per pack) in other seasons.


“The two gum companies were embroiled in a wrangle about ten months ago. Topps was offering a player $125 a year, plus a $75 bonus on a two-year renewal, for the privilege of using his picture, batting average and other statistics on its cards. Fleer, on the other hand, said it was also paying players $125 a year, or five per cent of gross profits—divided among all the players involved—but also would ‘pick up the tab’ for any money the players lost by not signing an exclusive contract with Topps.”

(1) If accurate, this indicates Post intended to produce an average of 4,000,000 of each of the cards in its 1962 cereal issue. Some readers believe the 800 million figure combines both Post cereal and Jell-O production.

(2) This would seem to give a ballpark figure for the production run of Fleer's 1962 Baseball Greats set. Again assuming Ad Age knew what it was talking about, that would translate to 6.06 million of each high-number card (89-154) in the Greats set, if the widely accepted hobby belief is true that those cards were issued in 1962, while the 1-88 low-numbers were issued in 1961. 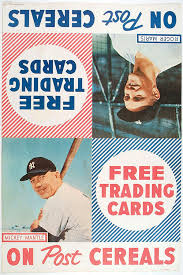 (3) This pegs the number of 1961 Post cereal cards at 2,000,000 each, but does not address whether this includes box-back cards only or the 10-cards sheets that coud be mailed away for.

(5) Some of these point of purchase sales promotional materials have survived in the hobby. I have never heard of an extant example of the "60-page merchandising guide". This piece would surely be a "holy grail" for advanced Post/Jell-O collectors.

(6) this seems to confirm hobby lore about the original geographic distribution of 1962 Jell-O box-back cards.
Posted by Bob Lemke at 10:34 AM