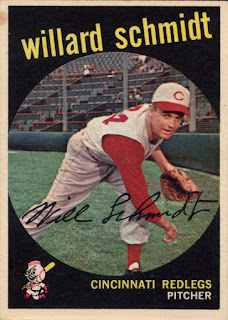 Cursory poking around on the internet has failed to produce a list of the number of major leaguers hit by a pitch per season. My gut feeling, looking at yearly leaders in that stat, is that the practice is more prevalent now than it was in the 1950s, approaching or even surpassing the numbers from the rough-and-tumble days of 19th Century baseball.

It was not until major league baseball was more than 80 years old, however, that a player was hit by a pitched ball twice in the same inning. (That's assuming it didn't happen between 1876 and the mid-1880s, when the stat began to be reliably kept.)

The first player to have been double-tapped in an inning was Willard Schmidt of the Cincinnati Reds in 1959 . . . and he was pitching that game.

The incident occurred on Sunday, April 26, with the Milwaukee Braves visiting Crosley Field.

Schmidt was nailed twice in the bottom of the 3rd inning, after he had come on in relief of starter Joe Nuxhall, who been tagged for three runs, four hits and a pair of walks in 2.1 innings' work

The Reds' pitcher was batting second in the Cincinnati half when he was hit by Lou Burdette, following a Roy McMillan lead-off single. Burdette gave up three more singles to tie the game, even though he induced a pair of ground outs.

Burdette was pulled in favor of rookie Bob Hartman, who gave up a walk and a pair of singles for three more runs before being replaced by Bob Rush.

Schmidt was the first batter to face Rush and he was hit for a second time in the inning. He took the mound in the top of the 4th, leading 6-3. When he gave up a single to Johnny Logan, he was relieved by Orlando Pena.

The lead see-sawed back and forth until Frank Robinson had a walk-off sac fly in the bottom of the 9th to earn the 11-10 victory.

There doesn't seem to be any rhyme or reason to Schmidt having been hit twice in the 3rd. There had been no Braves batters hit in the game, nor any in the two earlier games in the series. Schmidt was not known as a headhunter; in his seven big league seasons he hit only 11 enemy batters. Schmidt's pair of plunkings in that record-setting inning was half of his career total.

Willard was the second of eight pitchers the Reds used to secure the win. The Braves had sent six hurlers to the mound. (Curiously, four of the six Braves pitchers were named "Bob": Hartman, Rush, Buhl and Trowbridge.)


Frank Thomas ties the record
While baseball had gone 83 years without having a batter hit by pitch twice in one inning, the record was tied just over three seasons later by Mets outfielder Frank Thomas. Coincidentally, Thomas had been a teammate of Willard Schmidt's and played at third base and in left field in that April 26, 1959 game.

Thomas earned his pair of Purple Hearts in the first game of a Sunday double header on April 29, 1962, with the Phillies visiting during the N.Y. Mets inaugural season in the NL. He was in left field that day.

The Mets were ahead 1-0 when Thomas came to the plate batting second in the bottom of the 4th. Gus Bell had opened the frame with a single off starting pitcher Art Mahaffey. The Phils' pitcher then hit Thomas on the arm, helping to set off a seven-run innings by the Mets.

By the time Thomas came to bat again in the inning, the Mets were ahead 8-0 and relief pitcher Frank Sullivan hit Thomas in the foot.

Mets pitcher Al Jackson went the distance. The 8-0 win was the first shut-out in the franchise's history.

Frank Thomas was no stranger when it came to being hit by a pitch. In his 16 major league seasons, he was hit 51 times, including leading the NL with 10 in 1954.

Five more since '62
Since 1962, there have been five more instances of player being hit twice in an inning.