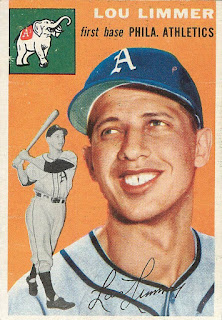 You’d think a broken neck would be a career-ending injury, but for Lou Limmer it was just a bump in the road on his fast rise through the minor leagues on his way to a modest two-year  major league career.

Limmer, from the Bronx, was signed by out of Manhattan School of Aviation. He began his professional career in the North Carolina State League in 1946-47, before being promoted to .

In a late-August game at in the Class A Western League, Limmer slid into third base. He was rising to his knees when the third baseman took the throw from first then stepped awkwardly across the bag, striking Limmer’s head with his knee.

Limmer later told teammates, “Everything went black for just a second, but there wasn’t much pain. What scared me was that I was temporarily blind. I remembered everything else, even being lifted onto the stretcher.”

Limmer spent three weeks with his broken neck in traction and another three weeks in a cast. At the time of his injury Limmer was leading the Western League with 28 home runs. While Limmer laid in a hospital bed, Carl Sawatski, on the final night of the season, captured the home run title, setting a modern league record with 29.

Limmer returned the next season as ’s first baseman. He batted .315 for the A's, with 29 home runs in 1949. Philadelphia put him on their 1950 roster, but in a move that was very unusual for the time, optioned him to , a Brooklyn Dodgers farm team in the Class AAA American Association.

Limmer was vying for playing time with the Dodgers’ own Danny Ozark, and became an early-season sensation.

In his first game with the Saints he had a 5-for-5 day at , including a home run. He continued to hit well through the end of May, batting .373 with five home runs and 23 RBI.

Though he continued to hit well through the season, Limmer seemed jinxed at his home field, . Purely a pull hitter, Limmer was unable to slug home runs at home, where the right field fence was 375 feet from home, and up a 10-foot embankment, besides. It was August 10 when he hit his first home run in ; at that point in the season he had 22 home runs on the road.

Limmer’s first home homer was not without suffering, however. The 400-ft. drive over the scoreboard came one pitch after he had fouled a pitch off his ankle.

The jinx also affected his base hitting, as the season neared its end, he was hitting .366 on the road, but only .202 at home. He looked forward to eventually making the A’s roster, as the right field fence at Shibe Park was only 331 feet down the line.

Limmer spent all of  1950 at , as he was not eligible for recall until the end of the season. He hit .277 for the season. For his success at , Limmer was named the American Association Rookie of the Year.

The parent club recognized Limmer's big year in the high minors and gave him a major league berth, though it was mostly a spot on the bench behind Ferris Fain, who hit a league-leading .344 that year. Limmer batted just .159 at the big-league level in 1951.

He returned to the minor leagues with Ottawa in the AAA International League for all of 1952-53.

When the A's brought up Vic Power for 1955, it spelled the end of Limmer's major league days. He continued to play in the high minors through the 1958 season. 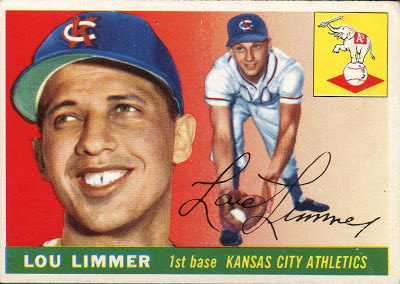