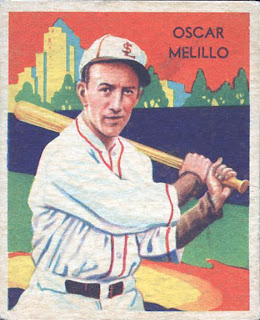 I found an interesting story in the March 30, 1949, issue of The Sporting News that almost certainly had some connection to Bill Veeck’s use of midget pinch-hitter Eddie Gaedel two years later.

The crux of the article was about a wager between Indians coach Oscar Melillo and Satchel Paige.

Paige had only recently arrived in camp, two weeks later than the rest of the pitchers. With the permission of manager Lou Boudreau, the ageless Paige had been conditioning on his own at

When Melillo first encountered Paige he said (I’d guess Cobbledick took some liberties in quoting the parties involved), “I hear you got control.”

“Man, you didn’t hear no lie,” Paige was quoted as replying.

After a bit more back and forth, with some kibitzing from other players, a wager was proposed by Melillo that Paige couldn’t throw eight of ten pitches for a strike.

Paige scoffed when a catcher’s shin guard was placed in the outfield to serve as a substitute home plate. “I c’n throw a thousand outa a thousand over that big old thing,” he was quoted. “Put a baseball cap down there. That’s all the plate old Satch needs.”

The writer went on to recount how Paige repeatedly hit the mark with both fast balls and curves, until he had run the count to seven strikes and two balls. 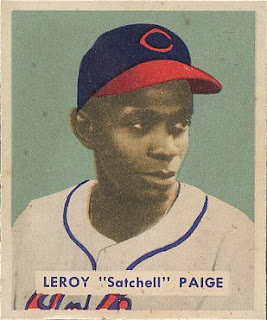 Then Melillo said, “You’re in trouble. You’re in bad trouble. Because you want to know why? Because the other ball club just sent in a pinch-hitter. A midget. He’s only this big,” the coach said dropping to his knees. “To make it worse, he hits from a crouch. You only got about six inches between his shoulders and his knees.”

Cobbledick then picked up the action, “(Paige) tied his long body into a tortured knot and as he unwound his whip-like arm came down. Then it halted suddenly in the familiar pattern of Paige’s famous hesitation pitch. Then it resumed its motion and the ball left the black hand and whizzed across the cap.”

Paige won the Coke that had been wagered, but Melillo may have painted a scenario that would become baseball history.