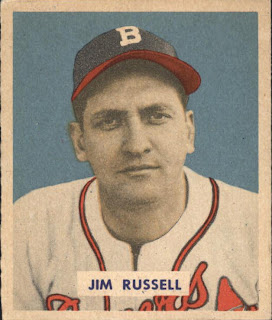 I have to take the medical details with a grain of salt, but an article in the May 18, 1949, issue of The Sporting News definitely makes the case that, as its headline read, Boston Braves outfielder Jim Russell was “The Luckiest Man Alive”.

The piece was written by Les Biederman . . .

Jim Russell, former Pirate who lives in , just outside of , calls himself the luckiest man alive today.
He was close to death last summer, but today is roaming the outfield for the Braves. Russell had a background of rheumatic fever as a youngster and when he developed two abscessed front teeth, the poison affected the valves of his heart.
Russell was stricken ill last year after the All-Star Game and spent the next three months in hospitals in , and at the near his home.
“I had a sub-acute bacterial endicarditis and only the fact that they fed me 8,000,000 units of penicillin a day for 70 days pulled me through,” he said. “They told me that 99 per cent of these cases are fatal and doctors wrote off my recovery as a miracle.
“I understand the medical journals published the case in full and the penicillin injections broke every record known to medical science.
“Doctor William Mullins of , , pulled me through. My weight dropped to 167, but now I’m back up to 195.”

The Braves paid all of Russell’s hospital bills, amounting to $4,000.