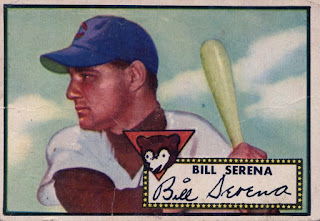 But in 1947 with Lubbock in the Class C West Texas-New Mexico League, Serena slugged 70 home runs.

I was somewhat taken aback when I read that in a headline in the March 10, 1948, issue of The Sporting News. I have more than a passing familiarity with mid-century minor league baseball and I was quite sure I knew all of the players who had hit more than 60 home runs in a minor league season, even in the lower level circuits of the Southwest with their livelier balls and thinner air.

It turns out that while the feature on Serena was correct, he had only hit 57 of his home runs during the regular season. Thirteen of his round-trippers had been slugged during the 14 post-season games in which the Hubbers had added the league playoff championship to the regular-season pennant they had copped. 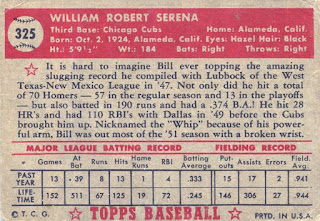 I was also surprised to read that this big hitting had come from a little guy. The article stated that Serena was only 5’9” and played at 175 pounds. I guess I would have known that if I had read the his Topps and Bowman baseball cards. I’d also have learned of his 70 homers on the back of his 1952 Topps card.

In the TSN article, Serena attributed his home run rampage not only to his abnormally strong wrists, but also to his accordion.

He explained that playing the squeeze box kept him relaxed and hitting. When he reported to Lubbock for 1947 he left his accordion at home. He quickly fell into a slump. His manager asked him what was wrong and Serena said he felt lonesome and homesick and missed his accordion. The manager went out and rented an instrument for Serena and he went on to bat .374 during the regular season, with 57 HR, 22 triples, 13 doubles and 190 RBIs.

Serena’s slugging at Lubbock earned him a promotion from Class C to Dallas in the Class AA Texas League for 1948. He told the TSN writer that he was taking his accordion to Dallas, but that he would be happy if he could squeeze out 20 or so home runs in the faster circuit. “I’m not taking any chances,” he was quoted. “The ol’ squeeze box comes along. I hope the Dallas players like music.”

For 1948 Serena did top 20 home runs. He had nine in 78 games with Dallas and 13 in 63 games with Class AAA Buffalo. He returned to Dallas for 1949, hitting 28 home runs and batting .281. The Cubs purchased him at the end of the Texas League season and brought him to Chicago. 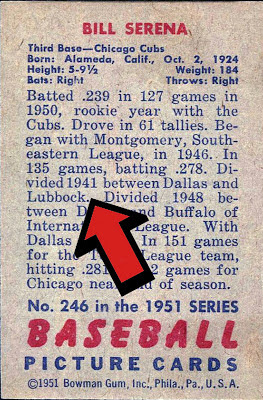 In 1950 he took over as the Cubs regular third baseman. A dozen games into the 1951 season, he broke his wrist sliding into second base.

When he returned for 1952, he was unable to win his job back from Ransom Jackson and spent the next three years filling in at second and third base. After the 1954 season he was sold to the  crosstown White Sox, but never played for them, or returned to the major leagues.

Serena played three more seasons in the high minors, retiring as a player after the 1957 season. He spent the next 38 years as a scout for the Indians, Braves, Rangers, Tigers and Marlins. He retired in 1994 and died in 1996.

While it is a shirt list of Bill Serena cards, there are some interesting notes about several of them.

After two years with Bowman, Serena switched to Topps for 1952, and his card appears in the scarce high-number series as one of the popular horizontal-format cards.

Serena went back with Bowman in 1953. His 1954 Bowman is one of the nearly three dozen cards in the set that had statistical errors corrected during the print run, creating a variation. His card can be found with the previous year's fielding average as either .983 (correct) or .977.

His 1955 Bowman card is among the short-print high-numbers. It pictures Serena with the White Sox, though the photo originally pictured him in a Cubs uniform and was retouched to give him a CWS cap. 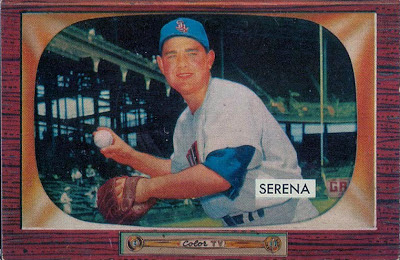