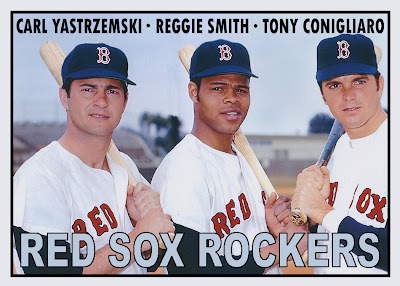 My list of pending custom card projects is likely to outlive me. I've got dozens of baseball and football player photos squirrel away in files both physical and electronic. My custom card output has slowed some in the past year or two, probably averaging something less than one new card a month. And that doesn't include my "rehabilitation" projects, remaking some of my earlier cards from a time when my skills weren't as far along as they are now, or in cases where clearly superior player photos have become available.


But while my to-do list is seemingly perpetual, I can never seem to strictly adhere to it. Something frequently comes along that strikes a chord and I drop everything else to take it on.


That was the case a month six weeks back when I found on eBay a very sharp photo of the Red Sox outfield of 1967 -- Carl Yastrzemski, Reggie Smith and Tony Conigliaro. The image of that photo on a late-Sixties style multi-player feature card (a term I invented for a Baseball Cards magazine article in the early '80s) leapt to mind and I was hooked.


I was the successdul bidder on the photo and while I waited for it to arrive, I did my homework. I quickly determined that the format for the card should be 1967. That's the year Tony C. was beaned and he didn't play at all in 1968. The trio was back in the Fenway outfield for 1969, but I decided to go with the '67 style.


Putting the back together was a challenge because of the space limitations and the necessity of covering three players. As always, I printed out stats from the SABR data base, then tried to copy the spirit of Topps writers of that era, who were writing for 10-year old boys, not adult card collectors. 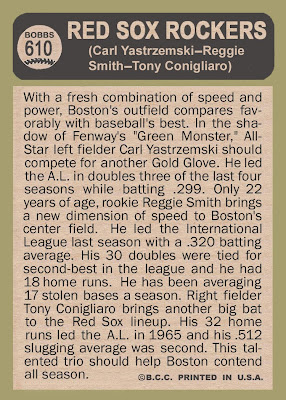 My original version of the card front had the "RED SOX ROCKERS" in red type, matching that on the Boston uniforms in the photos. When he viewed the prototype on my computer, SCD editor T.S. O'Connell, himself a baseball artist, pointed out the card title seemed hard to read, with the black-outlined red letters largely coming out from the navy blue sleeves.


My next choice was to go with a light blue, picked out of the sky in the photo, and that seems to have been a great improvement. Maybe the red letters caused the eye to strain too much towards the title in an effort to read it, but to me, the blue letters at bottom, along with the blue sky above, seem to better frame the players and allow the eye to be drawn to that central element. I hope you agree.