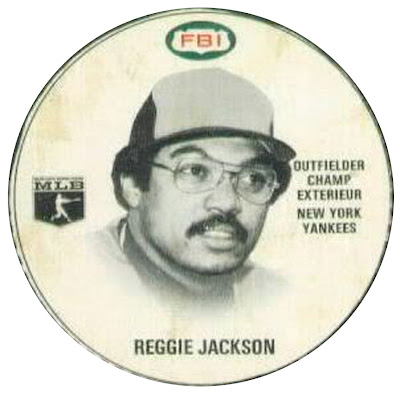 While my official responsibilites with the Standard Catalog of Baseball cards only cover the vintage (pre-1981) major league and minor league sections, I'm always willing (time permitting) to work with collectors to enhance the more modern listings.
Thus I hope to see added to the 2012 edition a newly reported regional disc set: 1981 FBI Discs.
Among the many types of 2-7/8" discs issued in the 1970s and 1980s, the currently listed 1982 FBI Discs are probably the rarest. These were issued in pairs on the bottoms of cardboard six-pack contains of Bantam (and possibly other brands) soft drinks in Canada. Because of their appearance on the bottom of a box, most discs suffer from scuffing on the front, or show indentations from the soda.
The 1982 discs are so rare that we recently were informed that the catalog's checklist of 30 players is incomplete by at least two. A panel of the 1982 discs has recently been offered at an outrageous price on eBay. That panel adds Ron Guidry and Richie Zisk to the known 1982 checklist.
Now we learn that there was also a 1981 FBI issue. The Reggie Jackson from that set is pictured here. Like the 1982 discs, the earlier issue has black-and-white player portraits at center that have had the cap logos airbrushed away. A green-and-orange FBI logo is at top, with the player’s name at bottom.
Unlike the 1982 FBI issue, there is no copyright date on the 1981 discs. The MLB Players Association logo flanks the portrait at left, with the players position (in English and French) at right, along with his team’s city. The team nickname apparently appears only on those discs that have more than one team in a city. The unnumbered discs are checklisted here in alphabetical order. This list is certainly incomplete and the set probably comprises at least 30 discs.
NM/M