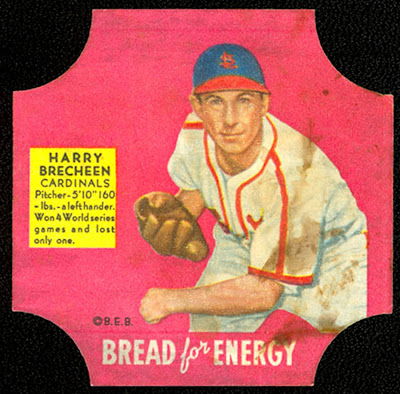 As mentioned in a previous posting, veteran collector Larry Serota is a frequent contributor both to this column and to the Standard Catalog of Baseball Cards.

For years he has unselfishly shared his research and "finds" with the rest of the hobby, so when he recently asked for our help on one of his collecting projects, it was a pleasure to accomodate him.

Larry is deep into what the hiobby used to call "oddball" issues . . . collectibles that are outside the norm of bubblegum cards.

One of his on-going quests is the completion of a master set of 1951 Fischer's Bread labels. Back in the early days of sliced bread, before plastic bags and twist ties, loaves were sold in colorful waxed paper wrappers that were sealed on the ends by a square of gummed paper. These end labels were often decorated with images of baseball and football players, Hollywood celebrities, Disney characters, etc., giving them a collectible aspect that it was hoped would entice children to ask their mom to buy one brand over another.

Because these labels were theoretically capable of surviving numerous openings and closing over the life of a loaf, they are ususally found today (if they are found at all) in wretched condition. Heavy multiple creases, tears, even missing pieces are the rule, rather than exception. And even at that, the early 1950s baseball bread end labels readily sell for $100+ for even "common" players.

One of these regional issues is known within the hobby as Fischer's Bread labels, though that name does not appear anywhere on the 2-3/4" square (except for the bobbed corners) labels. The labels have a red panel at bottom with "Bread for Energy" and they carry a B.E.B. copyright.

Thirty-two players are known in the Fischer's Bread label set, but there are 48 pieces in a master set. The labels are found with backgrounds of either red, blue or yellow, but 16 of the players can be found with two different colored backgrounds.

He has identified five players each in the red and blue subsets that are candidates to also exist in yellow. He believes only one player from each list will be found in yellow. From among the red-background labels, he's looking to ascertain which of these players also exists in yellow: Harry Brecheen, Billy Goodman, Cass Michaels, Andy Pafklo or Roy Smalley. The roster of blue-background labels that should yield one yellow version is: Ned Garver, Willie Jones, Eddie Joost, Roy Sievers and Earlky Wynn.

If you can help complete this master checklist by sending a scan of one of those elusive yellow-background labels, please contact me at scbcguy@yahoo.com.