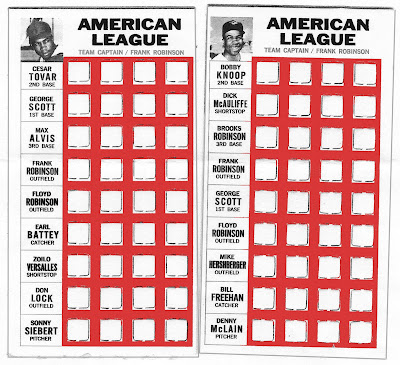 The enormous capacity of the internet to facilitate communications among hobbyists has resulted in two significant changes to the checklist for the 1967 Topps Punch-Outs game cards.
Probably since the first checklist for that set was promulgated in the mid-to-late 1970s, the issue was deemed to contain 91 different game cards, differentiated by the photo and name of the "Team Captain" appearing at top. It's unclear how or why the error was made, but it now appears that only 86 different players are represented as captains.
The concensus among dedicated vintage Topps collectors is that card depicting Bert Campaneris, Bob Gibson, Jerry Grote, Roy McMillan and Brooks Robinson were never issued. For the past two editions of the Standard Catalog of Baseball Cards, those five players have been noted in the book's listings as "Believed not to exist." With the publication of the 2012 edition, the checklist will be reconfigured without those five players.
There will, however, be two additions to the set list.
A photo variation of the Frank Robinson card has been reported by Texas collector Al Richter, who specializes in Topps variations.
Some of the 1967 Punch-Outs picture Robinson in a batting pose, wearing the uniform of the Cincinnati Reds, for whom he played through 1965. The Reds logo on the cap has been airbrushed off.
Another version of the card pictures Robinson in a smiling portrait, wearing a Baltimore Orioles cap.
The two Frank Robinson variations will join those of Roberto Clemente (plain background and stadium background) that have been listed in the Big Book for several years.
Another variation for the set has been reported by Lary Serota. He has Matty Alou punch-ourts that have the portrait photo facing either left or facing right.
You may have noticed that the line-up on each of the Frank Robinson Punch-Outs pictured here is different. Specialist collectors know that many, if not most or all, of the cards in this set can be found with different line-ups for the same "captain." While these are, indeed, legitimate variations, it is unlikely that the hundreds of those line-up variations that likely exist will ever be cataloged . . . at least not on my watch.
Such a "master list" compilation could theoretically be accomplished because of the ease with which pictures can now be digitally made and shared. A quick check of eBay alone shows more than two dozen Punch-Out cards for sale, including a couple of the three-card panels in which they were originally issued. A web page dedicated to the subject might generate enough response over time to accomplish that goal. But do "completist" player or team collectors really want to learn that they now need more than one Punch-Out of a player, especially when nice examples sell for $50-$500 apiece?
Posted by Bob Lemke at 2:05 PM