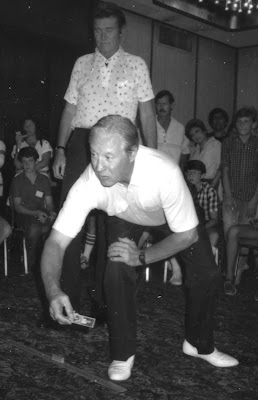 Bob Feller's failing health has been in the hobby news lately. The oldest living Hall of Famer has been involved in the sportscard and memorabilia hobby for well over 30 years as an autograph guest and speaker at card shows.
In that period he developed an understanding of the hobby with a special appreciation of collectors who were also knowledgeable baseball fans.
In that spirit, Feller was a celebrity contestant in a baseball card flipping contest at the 1985 National Sports Collectors Convention in Anaheim. I recently rediscovered some photos from that event that were taken by then-editor Steve Ellingboe of Sports Collectors Digest.
Back in '85, the card flipping contest was just one of many activities that took place at the National. The show back then wasn't strictly the buy-sell venue that it has since become. There used to be guest speakers, educational presentations, a softball game and other diversions.
The celebrity portion of the card flipping contest may have been unique to the 1985 convention. In the photo here, Feller is shown making a toss, while Chuck Connors waits for his turn. I no longer recall what other celebrities may have been involved. It is my recollection that Feller won the contest.
I just thought you might enjoy this photo of Bob Feller in a different kind of pitching action.
Posted by Bob Lemke at 8:54 AM