A custom card for the world's best punter 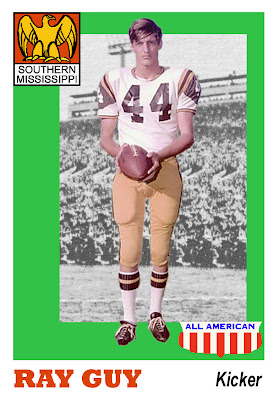 While I waited for my DVR to capture the Sunday football games, I finished a new addition to my 1955 All-American style update set.


The card features Ray Guy, who caused a sensation in the NFL when the Oakland Raiders made him a first-round pick (N0. 23 overall) in the 1973 draft. It was the first time (and, to date, the only time) a punter had ever been a #1 pick.


Guy's kicking at Southern Mississippi had been legendary. As a senior he set an NCAA record with a 61-yard field goal in a snowstorm at Utah State.


Earlier that season, at home against Louisiana Tech, the Golden Eagles had been stopped at their seven-yard line. From deep in his own end zone, Guy boomed a punt that went 80 yards in the air, than bounced and rolled through the opposite end zone. The punt was estimated at 120+ yards.

Guy was also a starting safety, setting a school record with eight interceptions in 1972. He was the first So. Miss. player to have his uniform number retired.


Guy was also pegged as the school's last-ditch quarterback; he could throw a football 70 yards in the air.


In the NFL, Guy justified the Raiders' gamble. He proved a formidable defensive weapon and never had a punt returned for a touchdown. He was an integral part of the Raiders' Super Bowl winnings teams in SB XI, XV and XVIII. Guy was first team All-Pro in 1976, 1977 and 1978.


Guy is a medmber of the Georgia (he was born and played high school football there) and Mississippi Sports Halls of Fame, and in 2003 was named to the College Football Hall of Fame. He has been a frequent finalist for the NFL Hall of Fame, but hasn't yet made it.


Guy changed the way NFL teams made up their roster. Prior to his game-changing entry into the NFL, teams usually had their placekicker or a halfback doing the punting. Today, an effective punter is essential for any contender. 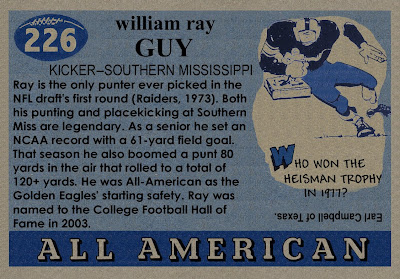