﻿
﻿ A baseball rhubarb went high-tech in 1953 when criminal investigative technology was used to settle a dispute.

In an Aug. 8 game at Buffalo, International League umpire Max Felerski ruled that a drive to the left-center field wall had gone through the screen there for a ground-rule double. Bisons manager Jack Tighe insisted the ball had bouned off the top of the screen for a home run.

Tighe insisted so vehemently that Felerski threw him out of the game. In reporting the expulsion to league president Frank Shaugnessy, Felerski said Tighe "spat in my face."

Shag telegraphed Tighe that effective immediately he was indefinitely suspended.

Tighe defended himself, saying, "I did curse and I may have sputtered, but I didn't spit. I wouldn't spit on a dog." He also admitted he had threatened to spit on Felerski.

On Aug. 10, Tighe packed up players Frank Carswell, Jack Wallaesa, Johnny Maldovan, who were witnesses to the confrontation, and general manager Joe Ziegler and drove to a police headquarters for a lie detector examination. It was reported to be the first time a polygraph had been thus employed in professional baseball.

Though it was an unprecedented event, the stakes were high. If Shaughnessy had determined Tighe to be guilty of deliberately spitting the umpire's face, he could have suspended the manager from Organized Baseball for a year.

The tests took nearly two hours, and the press was barred from the proceedings. According to the examiner, the tests taken of Tighe and the three players all indicated there was no spitting. When presented with the result on Aug. 12, Shaughnessy lifted Tighe's suspension and fined him $100 for swearing at the ump. Felerski later conceded the spitting "colud have been accidental." 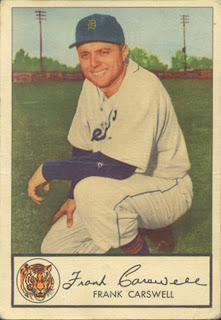 The Bisons finished third in the I.L. in 1953, and Tighe was replaced by Billy Hitchcock as manager for 1954. Tighe scouted for the Tigers in 1954 and went to Detroit as a coach in 1955-56. He was promoted to Tigers manager for 1957-58, finishing fourth and fifth, respectively, in the American League.
Though he had a lengthy minor league career as a player and a manager, Jack Tighe stint as a big league skipper was in the years that Topps didn't produce cards of the managers. I'm not aware of any baseball "card" picturing him.
Of the other players in this situation, only Frank Carswell appeared on a career-contemporary baseball card, and that was in the scarce 1953 Glendale Meats Detroit Tigers regional issue during his brief (mid-April through May 30) "career" in the majors.
Posted by Bob Lemke at 2:03 PM