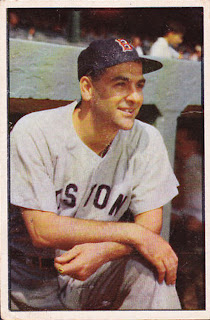 Last time in this space we recalled a 1953 exhibition game between the Pittsburgh Pirates bench-warmers and a local semi-pro team.

That was only one of many exhibitions games played by major league teams in 1953. A lot of these games were played to raise money for various charities.

One such game was a June 29 contest at Fenway Park between the New York Giants and the Boston Red Sox. As was often the case in those games, line-ups were fluid, often showcasing for the bonus babies who were often relegated to the bench for most of their two-year forced stay on the big club's roster. 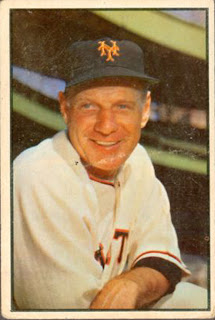 The Giants-Red Sox game, played before 17,122 fans for the benefit of hospitalized veterans, also included appearances by the respective teams' managers. The Giants won the game 6-3.
Giants' skipper Leo Durocher, at 47 years of age, had last played semi-regularly in 1940. He pinch-hit a single off the Green Monster. He was credited with a steal of second base when Boudreau refused to apply the tag on the sliding Durocher, who then took over for rookie shortstop Daryl Spencer for two innings.

Boudreau, who had last played semi-regularly in 1951 and was, at age 35 in his second year as Boston manager, also played some at second base and rapped a double down the left field line.
Posted by Bob Lemke at 4:01 PM