Because of the singular place that the T206 1909-1911 tobacco card set holds in the hobby, its checklist is considered virtually inviolate. When the Joe Doyle, N.Y. Nat'l (hands above head) variation was added 10 or so years ago, it was the first change in the list in many years. The checklist is likely to remain fixed for a long time to come.
So unique is the T206 set, and so popular even a century after its issue, that it is the only set in the Standard Catalog of Baseball Cards for which a subsidiary listing is provided of well-known error cards. These error cards are differentiated from the nine accepted variations in T206 by the fact that they were likely the product of printing errors, rather than man-made intervention in the process.
Because of the complex nature of the lithographic printing system by which T206 were produced, the series was prone to several types of errors, from wear or damage to one or more of the printing plates, to deficiencies of one or more of the more than one dozen specific colors of ink that might have comprised the image on any one card.
Some collectors feel these errors, especially when they exist in more than a single example, represent a suitable pursuit in and of themselves, separate from the mail body of T206. Some of the errors can bring several hundred dollars. For those reasons, many years ago we chose to incorporate the "1901-11 T206 Errors" listings in the big book.
Now, through the efforts of T206 devotee Trae Regan, four more T206 errors will be added to that "set" in a forthcoming edition of the catalog. These are not earthshaking discoveries; they have been known among serious T206 collectors for a long time, but they have never been previously cataloged. We'll share two of those with you today. Both have been confirmed in several examples, signaling they are "collectible" to those who want to search them out.
Randall, "MILWAUKEF"
The T206 card of Newt Randall can be found exhibiting the city name at bottom as "MILWAUKEF". This is likely the result of the bottom horizontal bar of the last "E" being damaged or obstructed in the later stages of the print run(s). All examples of the muffed Milwaukee reported thus far reported have appeared on Piedmont 350 backs.

Leifeld, partial "G"
On some examples of the T206 card of Lefty Leifeld (Pitching), there is a portion of the "G" of "PITTSBURG" on his jersey missing. Information on the backs of those cards with the partial-G is not available, though the Leifeld (Pitching) card was issued in both 150 Subjects and 350 Subjects printings. 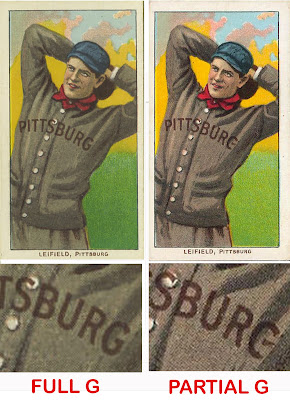 Next time, we'll present Regan's two other reported errors -- both involving the same Hall of Famer!
Posted by Bob Lemke at 8:08 AM