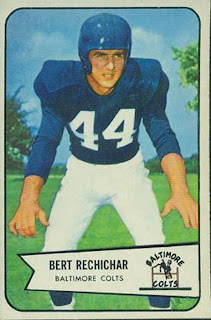 
In our presentation on May 22, we featured Hall of Fame football executive Jim Finks and his brief minor league baseball career.

Like many pro footballers of the era, Finks tried his hand at professional baseball as a way of earning a paycheck between football seasons.

Another such two-sport player of that era was Bert Rechichar.

Rechichar, though he was blind in one eye, starred at the University of Tennessee (as shown on this 1952 Bowman card). He was the first round pick (#10 overall) of the Cleveland Browns in the 1952 NFL draft.

He played only one season for the Browns before moving on to the Baltimore Colts (1953-59), Pittsburgh Steelers (1960) and N.Y. Titans (1961). He was basically a defensive back, sometimes playing at linebacker and, on offense, as an end or halfback. He also punted and place-kicked, and ran them back. 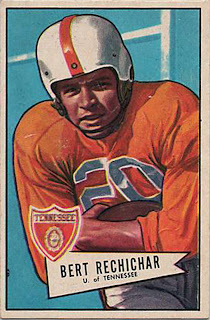 In 1953, the Colts' debut year in the NFL after the Dallas Texans were transferred, Rechichar practiced kicking long field goals, even though he wasn't the club's regular kicker. In the season opener against the Bears, the Colts found themselves at the Chicago 49 with four seconds left in the first half when an assistant coach wondered if Bert could kick a field goal from there. So Rechichar went on the field without bothering to attach his chin strap and lined a 56-yarder through the uprights. Until Tom Dempsey's 63-yarder in 1970, it was the NFL record. That same game, Rechichar ran back an interception 39 yards for a touchdown in the Colts 13-9 upset of the Bears in the franchise's first game played before 23,715 at Memorial Stadium in Baltimore.
Rechichar played two seasons in the lower minor leagues, as property of the Cleveland Indians. He was an outfielder with the Reading Indians (Class A, Eastern League) in 1952, but hit only .222. In 1953 he started the season at Class B Spartanburg of the Tri-State League. He was again hitting only about two and a quarter when the Peaches released him on June 26 to the Rock Hill Chiefs, of the same league.  Rock Hill put him on the mound the next day against Spartanburg. He lost to his old team 12-2, giving up five hits and five runs in five innings. Rock Hill gave him his pink slip after the one game. He went back to Reading, but batted only .175 and ended his professional baseball career.
Posted by Bob Lemke at 1:39 PM