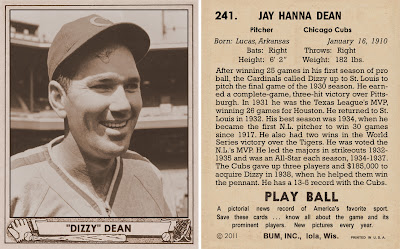 I never understood why Dizzy Dean was not included in the various mainstream national bubblegum card sets of the immediate pre-WWII era. His absence from the 1939-41 Play Ball and the 1941 Goudey and Double Play sets is glaring.

To be sure, by the late 1930s, when the Cardinals sold him to the Cubs, his glory days were gone, along with his fast ball.

Perhaps, considering the relatively small number of players in each of those sets, it was just a matter of, "What have you done lately?" 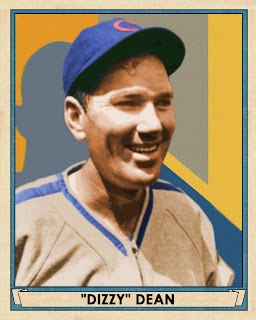 Dean's omission from those card sets leaves collectors with relatively few career-contemporary memorabilia choices from his days with the Cubs. The pictures from the team-issued photo packs are probably the most often encountered.

In researching and working on my 1941 Play Ball-style Vallie Eaves card (presented in my June 4 posting), I found a nice picture of Dean as a Cub.

A spent a day dinking around with the black-and-white photo in an attempt to come up with a creditable replica of a 1941 Play Ball card. Not entirely happy with the result, I decided to create my Dizzy Dean card in the 1940 Play Ball format. Since the typography and format of the back is identical to the 1941 style, the project came together fairly quickly.

As I revisit the work I did on the 1941 style, it's not as bad as I recalled, but I still can't get that pastel look of the originals. Maybe some day if I run out of new card creation projects (as if) I'll revisit the 1941 PB Dean.
Posted by Bob Lemke at 10:25 AM