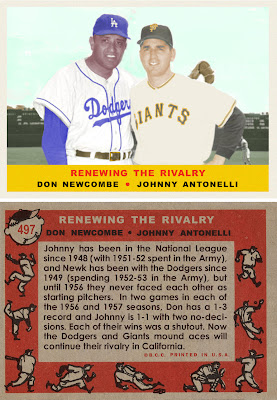 Back in the early 1980s, for an article I did in Baseball Cards Magazine, I coined the term "multi-player feature card" for the special cards issued off-and-on by Topps and Bowman beginning in 1953 (there were, of course, cards of this nature issued as early as the 1920s, but the article's focus was on cards of the '50s and '60s).

Over the holiday weekend, I completed what is only the third such card I have done in my career as a custom card maker.

A picture of pitchers Johnny Antonelli and Don Newcombe in their California Dodgers and Giants uniform was the inspiration for the card I made in the style of 1958 Topps.

I titled the card "Renewing the Rivalry." Its premise is that the long-time pitching foes who had faced each other in Ebbets Field and the Polo Grounds, would henceforth be taking their mound battles to the Coliseum and Seals Stadium.

In fact, Newk and Antonelli were the starters in the third game of the 1958 season, April 17, at Seals Stadium. As had been the case in several previous match-ups, Antonelli came away with a no-decision and Newcombe took the loss in the 7-4 game.

That was the last time the pair faced each other in their Dodgers and Giants livery. After going 0-for-6 in his eight starts between April 17 and June 15, Newcombe was traded to the Cincinnati Reds.

I know Antonelli and Newcombe faced each other a time or two between mid-1958 and mid-1960, when Newcombe was sold to the Indians, but since the specifics weren't pertinent to my faux-1958, I didn't dig up the data.

As I wrote on my card's back, Newcombe and Antonelli both came to the National League in the late 1940s.

Twice in September, 1949, on the 6th and the 29th, they appeared in the same game. Newcombe started both games and pitched complete-game victories, 10-2 and 8-0. Antonelli, then a bonus baby with the Boston Braves, pitched three-plus innings of relief in each game, with no decisions.

They met again in September, 1950, in the first game of a doubleheader on the 27th. Newcombe was the starter, going five-plus innings, but getting no decision in the Dodgers 9-6 win. Anotonelli faced two batters in relief, also getting a no-decision.

One or both of the pair were in the Army during the entire 1951-1953 seasons, and when both were back in the big leagues for 1954, Antonelli now with the Giants, they didn't meet the entire year.

They didn't face as starters in the 1955 season, either, though they both appeared in games of April 24 and July 8, with no decisions between them.

Like many, maybe all, of the actual 1958 Topps multi-player feature cards, the picture on my custom was colorized from a black-and-white photo. I tried to work the background in the green hues that are found on so many of the "real" '58 multi-player cards.
Posted by Bob Lemke at 1:28 PM