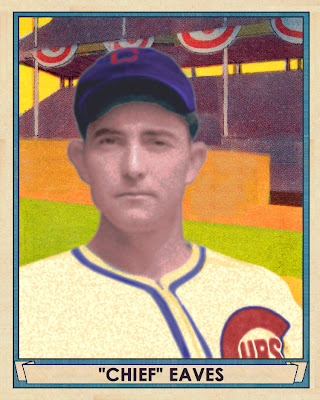 As a teenager and young adult, the closest thing my father and I had to a common interest was baseball. Besides fueling my childhood card collecting passion with the occasional and always unexpected purchase of a nickel wax pack, Dad's baseball stories awakened in me a lifelong interest in baseball history.

Raised in Fond du Lac, Wis., my dad's favorite major league team when he was growing up was the Chicago Cubs. In the years just before he went off to war, one of the Cubs top farm clubs was the Milwaukee Brewers of the American Association.

While Fond du Lac had its own Class D professional team in those days, the Brewers and Cubs were clearly the fan favorites in town. Dad would tell me about a fellow could walk all over town on a hot summer day and follow the Brewers or the Cubs game in progress emanating from the radios in living rooms and front porches along the way.

He told me countless stories of the characters harbored on those teams in that era: "Dim" Dom Dallasandro, Lou "The Mad Russian" Novikoff, Dizzy Dean, Paul Erickson (with whom Dad golfed in the Sixties), and a pitcher named Vallie Eaves.


Using language that was more common in those less politically correct days, Dad related how Eaves was the stereotypical drunken Indian ballplayer. 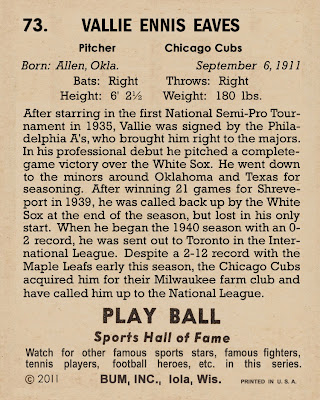 Those stories were recalled recently when I found on an internet sales site, a George Burke/Brace portrait photo of Eaves in a White Sox uniform.

The famed Chicago baseball photographers would have had to have been on the top of their game to catch Eaves in a major league uniform. For, while he pitched professionally for 19 seasons between 1935-1957, he was in the majors for only bits and pieces of five seasons.


At the age of 23, Connie Mack's scouts caught his starring performance in the first National Semi-Pro Tournament in 1935. The Philadelphia A's signed him and brought him immediately to the major leagues. He won his first-ever professional game, beating the White Sox 4-3 while pitching the distance on Sept. 12.

Eaves got two more starts that season, but proved to be ill-matched at the big league level and lost them both.

After four years of seasoning in the minors and back in semi-pro ball, Eaves pulled off a 21-10 season with Shreveport in the Texas League and was called up by the Chicago White Sox in mid-September. He lost his only start, but was retained on the big league as the 1940 season opened.

Between April 22-May 9, Eaves pitched in five games, with three starts, but had an 0-2 record when he was released to Toronto. Through the remainder of 1940 and into mid-1941, Eaves had a 7-26 record but the Chicago Cubs were still willing to give him a chance. At Milwaukee he was 4-6 when the Cubs called him up on Aug. 12.

Eaves pitched in a dozen games for the 1941 Cubs, including seven starts. His record was 3-3.

Because the Cubs played only day games, Eaves volunteered to Milwaukee manager Charlie Grimm that he would continue to pitch night games in Milwaukee, if desired.

Grimm did not take Eaves up on his offer. Jolly Cholly later claimed that during Eaves' time with Milwaukee, the pitcher had taking a particularly bad shelling and left the game and the clubhouse immediately. Later that night, Grimm received a phone call from the night watchman at Borchert Field. The security guard said there was a player there with a can of gasoline, a pile of newspaper kindling and a box of matches, threatening to light himself up.

Rushing to the ballpark, Grimm found the suicidal player was a drunken Eaves. He talked Eaves out of striking the match, telling him that if he's wait until after the season, Grimm would assist him in self-immolation.

After appearing in two games with the Cubs in April, 1942, with no decisions and a 9.00 ERA, Eaves was done as a major leaguer. His swan song came on May 19, when Cubs' manager Jimmy Wilson suspended Eaves and sent him back to Chicago for being drunk when he showed up at Ebbets Field for a Sunday doubleheader against the Dodgers.

One account, perhaps apocryphal, says that with major league-caliber pitchers in such short supply during World War II, the Cubs offered Eaves yet another chance for redemption, inviting him to spring training. If the account is to be believed, Eaves dutifully showed up at the Cubs' traditional spring training home on Catalina Island. The Cubs, however, because of wartime travel restrictions, were in spring training at French Lick, Ind. If the story is true, it would have been one of Eaves' most memorable no-shows.

As a major leaguer, Eaves had appeared in 24 games over five seasons with a 4-8 record and 4.58 ERA.

Only 30 years old, Eaves embarked on a 15-year odyssey of the western minor leagues, usually playing for two, three or four teams in a given season. As often as he would drink himself off one team, another manager would be convinced that he could control Eaves' thirst and would give him another chance.

He spent the 1943 season with Chattanooga and Montgomery in the Southern Association and Minneapolis of the American Association. A reinjury to a leg that had been badly damaged in childhood caused Eaves to sit out the entire 1944 season.

Fellow Oklahoman Pepper Martin, no stranger to the eccentricities of ballplayers, in 1945 convinced San Diego Padres owner Bill Starr to bail Eaves out of jail and put him on the mound. By late-July, Martin had gotten fed up with Eaves' antics.

The newspaper article read, "Manager Pepper Martin of the San Diego baseball team conceded today that he 'slapped' Pitcher Vallie Eaves in a hotel lobby here last night. Witnesses related, however, that the 'slap' was a hard right-hand punch to the chin.

"'He had it coming to him,' the volatile Martin declared, 'He let me down during the game yesterday, besides upsetting the discipline of the club and setting a bad example for the rest of the players.'

"Eaves, who stands a head taller than the former St. Louis Cardinals star, has been suspended five times for breaking training, Martin declared, and this is 'positively his last chance.'

"Eaves lasted three innings as a relief hurler in the second game with Oakland yesterday. The Oaks won the game and the series."

After stints with Texarkana and Oklahoma City in 1946, Eaves was back with the Padres briefly at the end of the season, winning one and losing three.

After that, Eaves never played at a higher level than Class B for the rest of his career, though he did have some singular successes. In 1947 he led the Big State League with 25 wins (and only five losses) for Texarkana. With Lufkin/Leesville in 1950 he led the Gulf Coast League with 26 wins.

On Aug. 21, 1952, he pitched a no-hitter over Natchez to give his Meridian team the Cotton States League pennant. It was nearly a perfect game, only one batter reached first, on a base on balls . . . and Eaves drove in the first two of Meridian's runs.

As a minor leaguer for 18 seasons between 1936-1957, Vallie Eaves pitched in 549 games. He had a 228-176 record and an ERA of approximately 3.94. Records of the era do not allow his strikeouts or walks totals to be compiled. He played for at least 30 different teams in Organized Baseball, pitching semi-pro several times in between those gigs.

For all his lengthy baseball career. I'm not aware that Vallie Eaves appeared on any career-contemporary baseball cards or collectibles. While the White Sox and Cubs both produced team picture packs in the years he pitched with them, Eaves either wasn't on the team when the photos were taken, or missed his appointment with the photographer.

My custom card was done in the style of 1941 Play Ball, though of course I had to take some liberties with the timing of his stint with the Chicago Cubs. The card is intended to represent a late-season "update" to the '41PB, whose original set was limited to just 72 cards.

I could have opted to picture Eaves with the White Sox, but by the time the 1941 _Play Ball cards were issued, he had been off the team for nearly a year.

Frankly, my Vallie Eaves card is not among my best work. Converting a black-and-white photo as a White Sox to the soft pastel look of the 1941 Play Balls as a Cub was a challenge that I was unable to master. I did learn, though, a few things about Photoshop that might stand me in good stead if I attempt to work in that genre again.
Posted by Bob Lemke at 9:16 AM