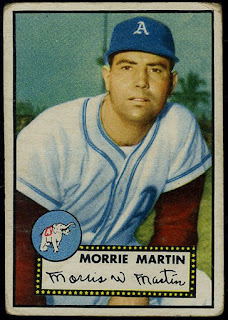 Have you seen the new Liam Neeson movie The Gray yet -- plane crash survivors, Alaska wilderness, computer-generated wolves, etc.? I haven’t, and I won’t until it debuts on one of the DirecTV premium movie channels. (You can read my rant about movies in theaters at the end of this post.)

A feature I found in the April 9, 1952, issue of The Sporting News brought the movie to mind.

Written by Art Morrow, who covered the Philadelphia Athletics for TSN, the piece was about the “charmed life” of  A’s pitcher Morrie Martin.

Martin had been the A’s leading pitcher in winning percentage in 1951, with an 11-4 record. He beat every American League team at least once during the season and had done no worse than break even in the W-L column with each of them.

During the off-season, Martin picked up a little pin money by shooting wolves near his home at , in the foothills of the Ozarks. There was a $10 bounty on the predators, but one of those wolf hides came pretty dear for Morris.

As he told the story, Martin said he had shot the wolf. Thinking him dead, he bent down to roll it over when the animal snarled and lashed out. “He’d been playing possum,” Martin said. “Well, I guess I could have placed in the Olympic high jump,” the A’s pitcher quipped, “but the wolf was quicker I was. He got me.”

The wolf’s claws had raked Morris, leaving a jagged wound from ankle to thigh. Writing in late March, Morrow said, “Morrie still has to douse the scab with antiseptic two-three times a week, and the scar may last a long time.”

The wolf scar wasn’t the only disfigurement Martin carried with him into spring training. He was sporting a shin bruise that was still black and blue, the result of an October auto accident that nearly killed him and his family.

Martin had been behind the wheel of the family car, “cruising along at 60-65 miles per hour,” when he crested a blind hill and his left front tire hit a pile of cinders in the road. The car careened out of control, Martin was thrown sideways and knocked unconscious. His wife and two children were relatively unscathed. The concussion that Martin sustained bothered him for several weeks.

“It would take more than a wolf or an auto to kill Morris Martin,” the reporter continued. “The Nazis had numerous tries at it without success when he served in the Combat Engineers. They shot him three times in three invasions—Africa, , —which is par for any war.

“They even bayoneted him in ,” Morrow continued, “But the best they could do was a bullet-hole through the thigh in the of the Bulge. That finally took him out of action.”

Despite the wolf attack and auto wreck, Martin allowed he’d had “a good winter . . . Got 305 quail and once I went up into and shot 16 pheasants.”

Martin's good luck didn't hold far into the 1952 season, however. In a May 10 game against the Senators, Martin broke the index finger on his throwing hand trying to field a hot smash off the bat of Mickey Vernon. He was sidelined for the remainder of the season.

RANT: As promised, here’s my rant about movies in theaters. The last one I went to was the remake of The Longest Yard at a theater in . The volume at which the movie played was very nearly intolerable. I guess these days the theaters have to blast the audio to allow the movie to be heard above the knuckleheads talking and the cell phones ringing. I don’t know if that was an aberration or the new normal, but I’m not about to find out any time soon.