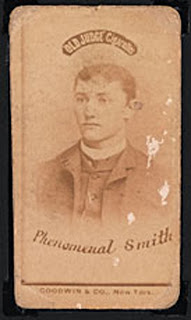 One of the great nicknames from the Old Judge era of baseball card issue was that of John F. “Phenomenal” Smith. (Today's baseball players are too cool or too professional to have nicknames.)

Smith earned the sobriquet in 1885 when he pitched a no-hit game for (American Association) in which not a single player got the ball out of the infield. In that Oct. 3 game he not only held the Orioles hitless, but struck out 16. Only two runners reached base, one on a walk and one on a dropped third strike – and Smith picked both of them off first base.

A few months later, pitching winter ball in in the days before there was official league ball on the Coast, Smith hurled another no-hitter, winning a 5-0 game for the San Francisco Chronicles against the S.F. Knickerbokers.

Smith had been born, with the name John Francis Gammon, in , (now a part of ) on Dec. 12, 1864. At the age of 19 he joined Baltimore, then a National Association team, in 1883. He was a little lefthander, only 5'6" tall and 161 lbs. The following year, in the American Association, he pitched for the Philadelphia Athletics and Pittsburgh Alleghenies. 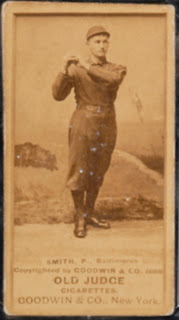 In 1885, besides pitching for , he had been with an independent team at , , and the American Association’s club. It has been reported that the not-yet-20 Smith's brash demeanor and braggadocio -- despite having to that point a 0-2 major league record -- so irritated his Brooklyn Grays teammates that on June 17, 1885, they intentionally misplayed behind him, committing 14 errors, allowing the visiting St. Louis Browns to win 18-5. Despite the fact that Brooklyn was already in 7th place in the league, 15 games behind, management slapped several of the offending players with large fines. For the sake of team unity, Smith was released.

He spent the 1886 season with Detroit in the National League, for whom he notched his first major league victory, matching it with a loss.

In 1887, Smith pitched in 58 games for the Orioles. He won 25 -- but lost 30. The following season he worked for the Athletics and the Orioles. He remained with the Athletics for most of 1889, also playing briefly with Hartford of the Atlantic Association. He stayed in  with the National League Phillies, for most of 1890-91, pitching three games for Pittsburgh in 1890. 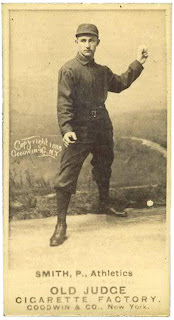 He left the majors for good when he joined in the Western Association in 1891. He played in Green Bay (Wisconsin-Michigan League in 1892) and Reading (Pennsylvania State League) in 1893.

While with in 1899, Smith faced a young pitcher named Christy Mathewson. Though Mathewson's record was 2-13 for Taunton, Smith recognized the 18-year-old's potential. That fall, when Matty traveled with his Bucknell football team to play a game at Penn, Smith lured him away from with a $10 per month raise (to $90) to join his team at . 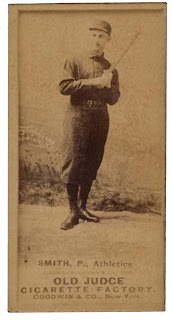 With , Mathewson won 18 games while losing only two, and in July that season, began his major league career with the New York Giants.

Smith ended his professional baseball career after the 1904 season, and joined the , police department, from which he retired in 1932. In that period he coached the St. Anselm’s basketball team off and on.

Smith appeared on a number of cards in the Old Judge series between 1887-1890.