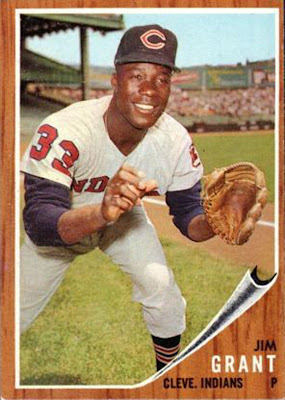 In my last posting, I promised to relate an account of Mudcat Grant's refusal to abide racial intolerance.


As I said then, Grant was generally considered an affable person, but as the 1960 season drew to a close, his refusal to tolerate bigotry, in baseball as well as in the wider world, more than a decade after Jackie Robinson had reintegrated the major leagues, had costly consequences.


Rather than attempt to recap the incident, I'll rerun the article from the Sept. 28, 1960, issue of The Sporting News by Hal Lebovitz, who regularly covered the Cleveland Indians for the sports weekly.

The season ended abruptly for Indians’ Pitcher Jim Grant. He is spending the final two weeks—without pay—at his home in He was suspended by Manager Jimmie Dykes for leaving the ballpark without permission during the Indians-Athletics game, September 16.
It all started out as a joke, but ended up on a deadly serious note.
It was always Grant’s custom to sing “The Star Spangled Banner" when the band played it prior to each game. He was out in the bull pen this time and he sang loud and melodiously as the National Anthem was being played.
At the line, “the land of the free,” the Negro righthander improvised with, “It’s not the land of the free for me in .”
A bull pen mate made some comment on Jim’s lyrics. It was nothing unpleasant, just conversation. Grant defended his line, adding that even in there was less discrimination.
This caused Ted Wilks, a pitching coach, to speak up, and Grant, knowing that Wilks lives in , came back with, “ is better than .”
At this, Wilks bristled, made a remark concerning Grant’s color. 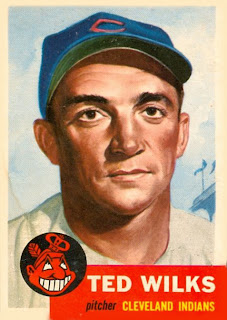 “I got so mad,” said Grant later, that I figured that if I stayed around I might not be able to control myself.”
He went to the clubhouse, got dressed and left the park.
Shortly after the game began, Dykes called the bull pen and asked to have Grant warm up. It was then Wilks told him what had happened.
“I had no alternative but to suspend the boy,” Dykes said later. “There’s absolutely no excuse for walking out on the team.”
Grant, after he cooled of somewhat realized this. Contritely, he phoned both Dykes and that night to apologize to them for his actions.
“I realized what I did wasn’t fair to them and I wanted them to know I was sorry,” he said. “I don’t blame Jimmie for suspending me. He had to. He’s been good to me and I’m sorry I put him on the spot by walking off. I was so upset that I knew I wouldn’t be able to do the job if he called on me to pitch.”
Others in the bull pen say that as soon as Wilks made the remark that inflamed Grant, the coach tried to apologize. He apologized to Don Newcombe, who accepted it, but Grant said later he wouldn’t accept any apology from Wilks.
He admitted he never had any difficulty previously with Wilks. “We never did say much to each other,” he added. “But I’m sick of hearing remarks about colored people. I don’t have to stand there and take it.”
He mentioned an earlier instance when a fellow bull pen inhabitant made a derogatory remark about a Negro spectator.
“And Paul Richards has been calling me names lately,” Grant said. “A person can only take so much.”
Richards, in , admitted he had called Grant “a name,” but insisted the Indians’ pitcher had asked for it.
“I held off on Grant for a long time,” said the manager, “but after he persisted in throwing at some of my hitters, I got on him just I would a white man.”
“Anyone with any intelligence realizes the colored people carry a burden. But Grant is the kind of fellow who wants special privileges simply because he is a Negro.”

Grant pitched for the Indians into the1964 season, then spent 3-1/2 years with the Twins including posting two of Minnesota's three wins over the Dodgers in losing the 1965 World Series. In the last four years of his major league career he pitched for the Dodgers, Expos, Cardinals, Pirates and A's, leaving the big leagues after the 1971 season.

After his playing days, Mudcat was a television broadcaster for the Indians, Dodgers and A's. He has given back to baseball by serving on the board of the Negro Leagues Baseball Museum, on the Baseball Assistance Team and on the Major League Baseball Alumni Association.
Posted by Bob Lemke at 1:38 PM